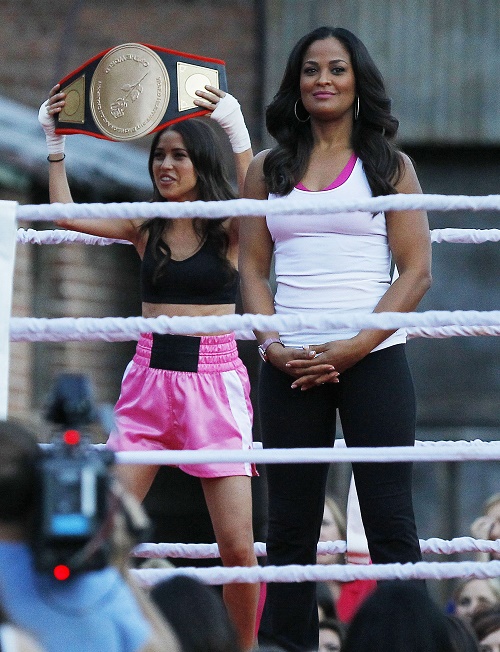 The Bachelorette 2015 spoilers revealed during The Bachelor finale that Season 11 would kick off with two Bachelorettes – Britt Nilsson and Kaitlyn Bristowe. Fans of the ABC reality TV show were racking their brains trying to determine which lucky lady would be chosen by the 25 hunky guys as the official Bachelorette during the 2015 premiere. Season 11 kicked off filming on March 12th, and according to spoilers, the guys chose to compete for Kaitlyn Bristowe, not Britt Nilsson. However, there is reportedly another twist developing – and Reality Steve claims that Britt Nilsson was not eliminated and sent home and she will still somehow be involved in Season 11.

The Bachelorette 2015 spoilers are already rolling in and on Sunday, March 15th Kaitlyn Bristowe and the 25 guys competing for her heart filmed their first official date in California. The group date was an outdoor event at a boxing ring in Los Angeles, and there was a special celebrity guest on hand for the date – former pro boxer and daughter of Mohammed Ali, Laila Ali. Crowds gathered outside and snapped photos of Kaitlyn Bristowe’s guys, shirtless of course, as they headed into the boxing ring.

We have seen enough seasons of The Bachelor and The Bachelorette to know how the first official boxing group date of 2015 most likely went down. Kaitlyn Bristowe and her guys most likely met with Laila Ali, she did a little coaching and mentoring cameo, and then they had a competition. Laila most likely served as some sort of referee or judge – and whatever winner she selected won a 1-on-1 date with The Bachelorette, Kaitlyn. We are kind of curious to see how hardcore the boxing match gets, and how many of the guys head back to the Bachelorette Mansion with black eyes or cracked ribs.

Are you happy that Kaitlyn Bristowe is the 2015 Bachelorette? What do you think Britt Nilsson role on Season 11 will be? Did you check out the pictures of Kaitlyn’s guys at the boxing ring – and predictions on who will be the 2015 winner yet? Let us know what you think in the comments below and don’ forget to check CDL tomorrow for more Bachelorette 2015 season 11 spoilers and news.