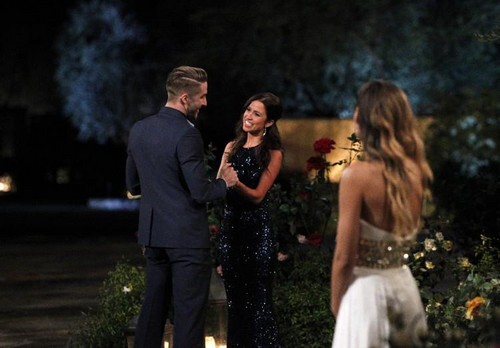 Kaitlyn Bristowe posted a video on SnapChat last week of herself lying in bed with a shirtless Shawn Booth, the video was quickly deleted but the damage was already done – and it was plastered all over the Internet. Obviously fans went straight to Reality Steve and demanded to know why his spoilers indicated that there was no Season 11 winner, but Kaitlyn was posting videos of herself in bed with Shawn Booth.

Reality Steve took to his blog and confirmed that his 2015 spoilers had actually been wrong all along, and Shawn Booth is the winner and currently engaged to Kaitlyn Bristowe. In Steve’s defense he is right more times than he is wrong, but this definitely takes a shot at the blogger’s credibility. Fans are already beginning to question how legitimate his sources really are, how could they misinterpret something as huge as whether or not a man got down on his knee and proposed to Kaitlyn Bristowe?

At this point it is obvious that Kaitlyn Bristowe is engaged to Shawn Booth, regardless of whether Reality Steve’s spoilers said so or not. You can’t help but laugh at the irony of it all. For the first time in a long time, ABC had actually fooled Reality Steve and the Internet was convinced there was no 2015 winner. The Season 11 finale of the reality TV show would have been a complete shock to fans – except for The Bachelorette herself spoiled the ending.

Have you been watching The Bachelorette this season? Do you think that Kaitlyn Bristowe and Shawn Booth will actually get married? Did she choose the right guy? Let us know what you think in the comments below and don’t forget to check CDL tomorrow for more Bachelorette 2015 spoilers and news.