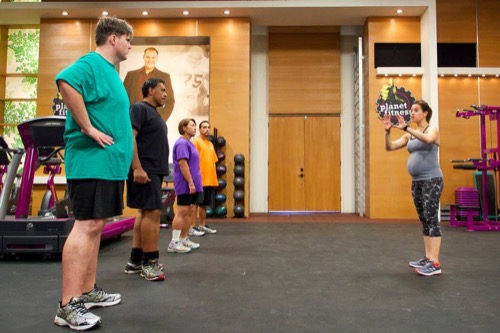 Tonight on NBC “The Biggest Loser” which features over weight contestants competing to lose weight to win money returns with an all new Thursday January 22, season 16 episode 17 called “End Zone” and we have your weekly recap below. On tonight’s episode Jenna Wolfe visits as a guest trainer and leads a workout for the group; the contestants return to the Los Angeles Memorial Coliseum and run up and down its steps; and the finalists revisit milestones as they watch video packages of their journeys.

On the last episode, Trainer Bob Harper had finally returned to the ranch, and revealed which player he was bringing back from Comeback Canyon to rejoin the competition. While the four other finalists were excited to see their friend, they were also more determined than ever to stay in the competition. One contestant struggled with this new curveball in the game, while another shared concerns with their trainer about being able to continue their new healthy lifestyle once they got home. Later, it was time for a rowing and basketball challenge that awarded the winner a one-pound advantage, a valuable prize at weigh-in as the final five become the final four. Did you watch the last episode? If you missed it, we have a full and detailed recap right here for you.

On tonight’s episode as per the NBC synopsis, “it’s the last week on the ranch for the final four contestants, and time to celebrate just how far they’ve come on their weight loss journeys. They’ll return to the Los Angeles Coliseum where their journey began for a challenge requiring them to put all of their lost weight back on and drop it incrementally at 16 stops as they did each week, while running up and down the Coliseum steps. The winner gets a cash prize plus a valuable weigh-in advantage when the stakes have never been higher. The finalists also watch emotional journey packages with their trainers, revisiting the memorable milestones of their time at the ranch. ‘Today’ show lifestyle and fitness correspondent Jenna Wolfe visits as guest trainer, leading the contestants while pregnant through an intense, ‘no excuses’ workout, while Bob Harper puts the other three trainers – Dolvett, Jennifer and Jessie – through an intense workout of his own. And season 15 contestant Ruben Studdard appears in a ‘Challenge America’ segment before the final weigh-in at the ranch reveals the three finalists of season 16 who will be competing for the grand prize of $250,000 and the title of ‘The Biggest Loser.”

The Biggest Loser season 16 episode 17 airs at 8PM on NBC and we will be live blogging it with all the up-to-the-minute details. So make sure to come back to this spot and spend the evening with us! Make sure to refresh often to get the most current details and updates!

It’s been seventeen weeks and the competition is down to only four contestants. So tonight is going to be an extra special episode of the “The Biggest Loser”. For one, Jenna Wolfe is going to be the guest trainer this week and even though she’s seven months pregnant – she’s going to show these contestants what it means to keep going even if you’re tired or claim you don’t feel like it.

The trainers all know that once the contestants return home then they’re bad habits such as eating junk food or putting off hours at the gym because of some excuse or another is bound to rear its ugly head. So Jenna is going to show them how they can keep in shape with simply at home exercises. And this time no excuses because she’ll be training right alongside them.

And while Jenna will be doing that, Bob is going to be putting the trainers through the ringer. He had Jessie reaching for the bucket and Dov drenching himself in sweat.

It was fun to watch and really did cheer up the contestants watching it. Apparently they love watching the trainers get a taste of their own medicine. But eventually the fun had to end and they had to do their next challenge.

The challenge was they had to wear body weights representing their original overall weight upon entering this competition and then they proceeded “lose it all” again after going through the ringer of climbing up and down arena steps. And this turned out to be an eye opener for Rob. For a second there, he honestly forgot what it had felt like to be so heavy. Hence, at the end of the competition, he was a tad emotional.

Truthfully, they were a little teary eyed after being reminded but Rob didn’t even bother trying to win he challenge – he was just so glad about how far he’s come – the rest didn’t seem to matter.

Later, in time honored Biggest Loser tradition, the trainers had put together a video reel highlighting how far each of the contestants have come on their journey to lose weight. And the contestants were left in tears. Yet most of all – they felt inspired.

After they had watched their earlier selves, the contestants hit the gym. And they hit the gym hard because it’s now or never. Only three of them are going to make into the finale and so one of them has to go home tonight.

The contestants were doing what they never thought they’d be capable of in a million years and admittedly sometimes it wasn’t enough. But they continued to push themselves like never before and they did so in hope they win this whole thing. And no one on this show can say they don’t want to win.

So, yes, there were some bust-ups and pent-up frustrations. They each had to let out in their own way. And yet it all led somewhere.

In their final weigh-in, each contestant was once again put on that measuring block of doom. And though they hadn’t liked it when they only lost three pounds or four – there was also Sonya who lost six pounds. And Rob who lost thirteen. So, no matter what they’ve been through to get here – it was all worth it.

Toma and Woody were hurt they hadn’t lost more than they did but Woody, who ended up being eliminated in tonight’s episode, refused to be disheartened. He told the audience that even though he wasn’t going to win The Biggest Loser – don’t count him out on the At-Home weight loss competition.

As for Toma, Sonya, and Rob, good luck to them I say!