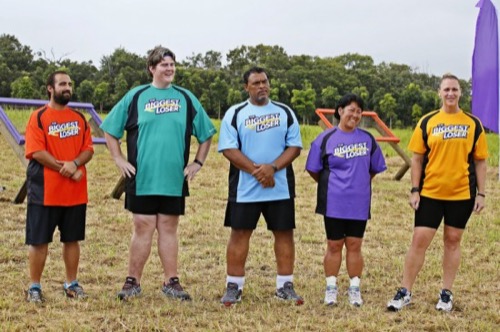 Tonight on NBC The Biggest Loser Glory Days Season 16 finale which features over weight contestants competing to lose weight to win money returns with an all new episode. It’s the Thursday, January 29, Season 16 finale called “Live Finale” and we have your weekly recap below including who won! On tonight’s episode the winner of the $250,000 prize is crowned in the Season 16 finale, and the eliminated players return to weigh in for the $100,000 at-home prize.

On the last episode of Glory Days, it was the last week on the ranch for the final four contestants, and time to celebrate just how far they had come on their weight loss journeys. They returned to the Los Angeles Coliseum where their journey began for a challenge requiring them to put all of their lost weight back on and drop it incrementally at 16 stops as they did each week, while running up and down the Coliseum steps. The winner got a cash prize plus a valuable weigh-in advantage when the stakes had never been higher. The finalists also watch emotional journey packages with their trainers, revisiting the memorable milestones of their time at the ranch. ‘Today’ show lifestyle and fitness correspondent Jenna Wolfe visited as guest trainer, leading the contestants while pregnant through an intense, ‘no excuses’ workout, while Bob Harper put the other three trainers – Dolvett, Jennifer and Jessie – through an intense workout of his own. And season 15 contestant Ruben Studdard appears in a ‘Challenge America’ segment before the final weigh-in at the ranch reveals the three finalists of season 16 who will be competing for the grand prize of $250,000 and the title of ‘The Biggest Loser. Did you watch the last episode? If you missed it, we have a full and detailed recap right here for you.

On tonight’s episode as per the NBC synopsis, “In this must-see, exciting live finale, the 20 contestants from this season return for a special reunion and a chance to weigh in one last time – and show America how much weight they’ve all lost since beginning their weight-loss journeys. Those who have been eliminated will compete for the $100,000 “at home” prize. Then it’s the moment viewers have been waiting for, when one of the three finalists will be named this season’s “Biggest Loser” and win the coveted grand prize of $250,000.”

The Biggest Loser season 16 episode 18 airs at 8PM on NBC and we will be live blogging it with all the up-to-the-minute details. So make sure to come back to this spot and spend the evening with us! Make sure to refresh often to get the most current details and updates!

Tonight’s season 16 finale of The Biggest Loser kicks off live in Hollywood with host Alison Sweeney. Alison reveals that tonight one of the final three contestants will be crowned the winner and given a check for a quarter of a million dollars. The season kicked off with the contestants totaling in weight over 6,000 pounds. Alison shares a video clip of this season’s “Glory Days” athletes and some of their best and worst moments this year.

The Biggest Loser trainers join Alison Sweeney on stage, including “Comeback Canyon” creator Bob Harper. Bob discusses his time at “Comeback Canyon,” and Alison jokes that “one on one time with Bob Harper is tough for anyone.” This was Jen and Jesse’s first season on Biggest Loser. Jen gushes that the contestants took care of her as much as she took care of them. Jesse agrees that he couldn’t help but get emotional with the contestants while he was training with them. Veteran trainer Dolvett says that what made Season 16 so spectacular was the fact that they were all former athletes, and so competitive and determined to better themselves.

Tonight during the season finale – the 17 contestants that were eliminated will get a chance to battle it out for a runner up prize of $100,000. The first three athletes to battle it out on the Biggest Loser stage tonight will be Damien, Emmy, and Lori. Alison Sweeney brings out the Biggest Loser scale on to the stage, the athlete with the highest percentage of weight loss will be taking home $100,000.

Zina, Chandra, and Blake are the next contestants to take the stage for their final weigh-ins of Season 16. Zina weighs in first at 226 pounds, and a total weight loss percentage of 14%. Chandra is up next, she steps on the Biggest Loser scale and it reads 270 pounds, so she lost a total of 20.82 %. Scott is still in the lead with a total percentage of 32.79. Now, former soccer player Blake is up on the scale, she weighs in at 154 pounds and a total percentage of 38.65 % – so she is now in the lead for the $100,000 cash prize.

Matt, Mike, Gina, and Vanessa join Alison Sweeney on the Biggest Loser stage next for their final weigh-in of Season 16. Mike, a former wrestler, steps on the scale first – he weighs in at 249 pounds, so he lost a total of 34.79%. Blake is still in the lead, now it is Gina’s chance to try and beat her. Gina weighs in at 177 pounds and total of 26.8%. Former WNBA star Vanessa steps on the Biggest Loser scale 299 pounds for a total percentage of 18.31%. Matt is up next and according to the Biggest Loser scale he lost 155 pounds and total percentage of 40.16%. Matt is now the new leader for the $100,000 prize.

The final three contestants, JJ, Rondalee, and Jordan join Alison Sweeney for their final Biggest Loser weigh-ins. JJ jumps on the scale first, he weighs in at 225 pounds and lost a total of 42.60%. He is the new leader, and beat Matt’s loss of 40.16%. Rondalee steps on the scale and lost 93 pounds, a total percentage of 33.21 %. Former baseball MVP Jordan is the final contestant to weigh in for the $100,000 prize. Jordan weighs in at 180 pounds, which means his total percent of weight loss was 44% and he will be taking home a cash prize of $100,000.

Now, the $250,000 prize is on the line for the final three contestants – softball player Sonja, Rob, and former soccer player Toma. It’s time for the Season 16 final three to step on the Biggest Loser scale for on last time to see which one of the will be taking home the grand prize. Sonja is up first, her starting weight was 283 pounds, her current weight is 139 – which means she lost a total percentage of 50.83%. Rob started out as this season’s heaviest contestant with 483 pounds. He now weighs in at 245 pounds, which is a total percentage of 49.28%. Sonja is still in the lead, it is down to her and Toma.