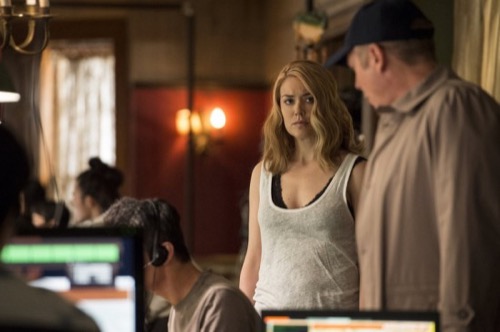 Tonight on NBC their criminal drama, The Blacklist starring James Spader continues with an all new Thursday October 1, season 3 premiere called, “The Troll Farmer.” On tonight’s episode, the FBI hunts for Liz (Megan Boone) for the murder of an attorney general in the Season 3 premiere.

On the last episode in the season finale Liz (Megan Boone) realizes she was being framed by The Cabal forcing Red (James Spader) to use his connections to help her clear her name. As Cooper (Harry Lennix) received shocking news, Ressler (Diego Klattenhoff) Samar (Mozhan Marno) and Aram (Amir Arison) had to decide who on the task force could still be trusted. Did you watch the last episode? If you missed it, we have a full and detailed recap right here for you.

On tonight’s episode as per the NBC’s synopsis, “the FBI hunts for Liz for the murder of an attorney general in the Season 3 premiere. Also: Red and Liz try to flee the city with help from a Blacklister called the Troll Farmer; and Dembe is put in a perilous situation.”

Tonight’s episode of The Blacklist kicks off with Liz and Red on the road in a van – they’re on the run. Donald is briefing his team on Liz and Red, he warns them that she is no longer an agent, and she is wanted for over 14 murders of CIA agents, including a Senator. Samar gets a sighting of the van on a traffic camera on the highway, Ressler sends a chopper out to locate the van.

The van goes through a tunnel, but Samar is baffled because the van doesn’t come out the other side. Liz and Red hopped on to a truck transporting brand new police cars. They take one of the police cars, and leave a warehouse undetected – now they are riding around the city disguised as police officers.

Ressler heads in to the interrogation room to question Cooper – he confirms that he told Agent Keen to run, Tom Connolly was framing her and she was about to go down for crimes she didn’t commit. Cooper says that Ressler is in charge now, but he pleads with him to let his wife Charlene go, she didn’t commit any crimes.

Red and Liz heads in to a dive bar, Red is apparently friends with the owner. They go in to the stock room and open a trap door – it leads them down to a hidden room – the bartender locks them in. Liz is confused, Red informs her they are going to be hiding out in the hidden basement for at least a week, luckily there is a TV there.

Meanwhile, Dembe’s daughter is in the kitchen and she hears a noise. She rushes to her baby’s nursery and a man is kidnapping her. She pleads with him to leave the baby – he tells her that he wants her father and will text her instructions, and then leaves with the baby. Afterwards, he pays Peter a visit – he warns him that the Clandestines know he was bluffing, and Red really does have the Folcrom.

In the secret room, Elizabeth and Red are watching a news report about themselves – there is a manhunt for the and they believe that Elizabeth is a Russian spy. Elizabeth turns off the TV, she’s upset, she doesn’t want people to believe that she is a terrorist. Red reassures her that as soon as security dies down – they will be able to get out of DC.

At the bar, the bartender’s sister sees Elizabeth and Red on the news. She freaks out and calls the FBI. Red takes her brother hostage at gunpoint and tells his sister to get rid of the FBI, or else he will kill him. When Ressler and his tea arrives – she lies and says that it was all a misunderstanding. But, a phone starts ringing in the secret room and Ressler hears it. Ressler and his men storm the secret basement – but Liz and Red are gone, they escaped through a sewer grate.
Elizabeth and Red make it to another safe house, Elizabeth dyes her hair blonde while Red works on their getaway plan. He has a man that he calls the “Troll Farmer.” He is a master at creating rumors, and panic. Red is going to enlist his help to create some smoke so that they can get out of DC.

Elizabeth and Red pay the “Troll Farmer” a visit. He and his tea get to work creating a smoke screen so that they can escape, they have even brought in body doubles to pose as Red and Liz. Ressler returns to the FBI office, he informs Cooper that he is being released – and his wife is being released as well. Cooper is surprised that Ressler didn’t rat him out for telling Liz to run. Ressler admit that he let Liz run at first too – and now the attorney general is dead because of it. Now he intends to uphold the law.

Ressler’s team finds a photo on Twitter with Red and Elizabeth in the background – they rush to the location where the photo was posted from, unaware that it was a fake posted by the “Troll Farmer.” When they arrive, it turns out to be a drug den full of gang members. Meanwhile, two vans arrive to pick up Red and Elizabeth form the safe house, they are splitting up. Back at the FBI office, they finally put two ad two together and realize that they are being duped. Then, CNN puts out a report that Red and Keen were captured in Colorado – which is already false.

Donald realizes that all of the tips are claiming Elizabeth and Keen are on the South Side, so they all rush to the North Side. Red makes it through the traffic barricade – but Elizabeth’s van doesn’t make it out. Red calls her, and he gives her a pep talk. He warns her that she needs to find a place to hide where the FBI won’t find her. Elizabeth cries that she can’t do this with out him. Red tells her that she is just like her mother Katarina, and she will be just fine. Meanwhile, Dembe is still trying to track down his granddaughter. He arrives at the house of the man that kidnapped her and demands to know where the baby is. He surrenders himself to the captor – who sends the baby back home safely.

Elizabeth orders the driver of her van to take her to Harold’s house – when she realizes that he is okay, she runs to the White House. She jumps the fence and informs the guards that her name is Marisha and she is a spy for the Russian government – she is seeking diplomatic immunity. Ressler is two seconds too late, he watches her surrender herself and can’t capture her.