BY Amanda Austin on May 14, 2015 | Comments: one comment
Related : Recap, Television, The Blacklist, TV 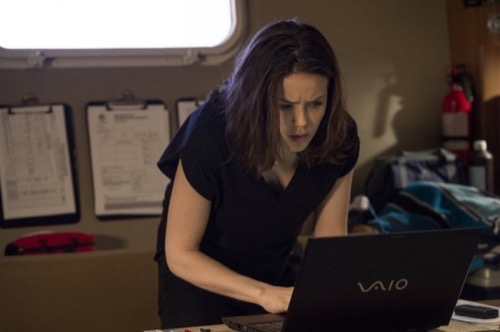 Tonight on NBC their criminal drama, The Blacklist starring James Spader continues with an all new Thursday May 14, season 2 finale called, “Masha Rostova” On tonight’s episode, Liz [Megan Boone] discovers she’s being framed by the Cabal, prompting Red [James Spader] to tap into his connections to clear her name, in the Season 2 finale. Also: Cooper receives stunning news; and the task force is plagued by trust issues.

On the last episode the FBI tracked a dangerous Russian assassin named Karakurt. Liz and Ressler gained insight on Karakurt by visiting Russian Counter-Intelligence, which also provided information about Liz’s mother. Meanwhile, Cooper fell into a compromising position. Did you watch the last episode? If you missed it, we have a full and detailed recap right here for you.

On tonight’s episode as per the NBC’s synopsis, “in the season finale Liz (Megan Boone) realizes she is being framed by The Cabal forcing Red (James Spader) to use his connections to help her clear her name. As Cooper (Harry Lennix) receives shocking news, Ressler (Diego Klattenhoff) Samar (Mozhan Marno) and Aram (Amir Arison) must decide who on the task force can still be trusted.”

Tonight’s episode of The Blacklist kicks off with Red on the phone with Elizabeth – he warns her that the Kabal framed her – and she is the one that infected the Senator with the virus. Meanwhile, Tom Connolly shows up at Harold Cooper’s office and announces that he has a warrant for Elizabeth’s arrest. Harold insists that she is innocent, but tom reveals that she is the daughter of a KBG Agent and they have reason to believe that she and Red have been working together to complete his own personal agenda.

Ressler and the rest of the team is holding all of the politicians from the funeral and they are testing them to make sure they aren’t carrying the virus. Ressler and Samar are watching surveillance footage from the funeral – they think that whoever infected the Senator is in the room, they have no idea that Elizabeth is the one carrying the virus. Tom Donnolly orders FBI agents to escort Harold Cooper off the property. Ressler and Amar get the results, everyone is negative for the virus, they finally put two and two together and realize that Elizabeth was the only one that touched the Senator that they haven’t tested.

Elizabeth overhears Harold arguing with Connolly at the office, she realizes that red was right and she is being framed. She calls Red and tells her that they are after her and tries to make a run for it – Connolly and his men catch up to her in the elevator with their guns drawn. They take Elizabeth in to custody and take a sample of her blood to test it for the virus. Elizabeth learns that they are framing her for the bombing at the Russian intelligence agency. She tries to tell the men that are questioning her about the Kabal and Tom Connolly. They aren’t buying it, they know she was born in Moscow and her real name is Masha.

Ressler returns to the office and learns that Harold Cooper was “removed of duty,” and the Senator that contracted the virus has died – which means that Elizabeth is on the hook for murder. The Seargent informs Ressler that she is appointing him as interim director, and it is his responsibility to figure out whether or not Elizabeth is really a Russian spy.

Harold meets with Red at a church, Cooper tells him that they have to save Elizabeth. Red reassures him that they have somebody on the inside. The power company is turning off the lights and it will take the generators 90 seconds to kick on. Red has a man on the inside and he is going to help Elizabeth get out. At the office the lights turn out, Harold calls Elizabeth on a burner phone and gives her directions to get through an emergency passage way to the loading dock. Elizabeth follows his directions, but Ressler intercepts her and tells her not to run. He wants her to stay in custody and fight this, but Elizabeth refuses. She rushes past Ressler and outside to the getaway car where Red is waiting for her.

Red, Elizabeth, and Harold sit down and try to figure out how the Kabal infected her with the killer virus. She realizes it had to be when she tackled Karakut at Union Station, they are going to pull the security footage to see if they can get proof. Tom Keen calls Red’s phone and begs him to let him talk to Elizabeth, he wants her to leave town on his boat with him and promises to get her a new identity. Red hangs up on him and says that’s not necessary. Meanwhile, Red is working on a plot of his own with Dembe, he meets Dembe at a warehouse and says that they only have one shot to strike and they can’t miss.

Elizabeth and Harold head to Union Station and get the surveillance footage – she recognizes Karakut in the footage and realizes that it is Anthropov. Harold tells her that she is on her own from now on, he has to leave because his wife was just arrested for leaking documents to the press, Connolly is behind it. Elizabeth pays their informant Anton a visit, she demands to know where Anthropov is – he gives her an address to a safe house. Elizabeth asks Anton about her mother Katarina, he freezes up and says he can’t help her. Elizabeth realizes that red paid him off – she heads to Red’s house and demands to know why he is stopping her from leaning about her mother. Red insists he is doing it for her and protecting her from her own sins.

Elizabeth heads to Tom’s boat and says that she needs his help – she found a lead, but she can’t follow it without his help. Tom says that she is crazy, there is no way she is going to be able to clear her name – she needs to get out of town ASAP. Elizabeth convinces Tom to go to the safe house with her and try to find Anthropov. When they arrive, he runs out another door and hops in his car and makes a getaway. Elizabeth and Tom jump in their car and begin chasing him through the streets. Anthropov pulls over in an alley where two men in a black SUV are waiting for him. When they see that Elizabeth and Tom have made Anthropov – they shoot and kill him and leave. Elizabeth sobs in the alley that he was the only link she had to her mother and cleaning her name.

Elizabeth and Tom head back to the boat and he cleans up her cuts from the shootout. She cries and begs him to take her with him, far away on his boat. Tom tells Liz that they can’t leave now or else she will never learn the truth about who she is or where she came from. Tom asks Elizabeth what she wants, she cries that she just wants him. After Elizabeth and Tom make love, she remembers the flash drive that she took form Anthropov’s safe-house. She realizes that it is full of records proving that the Kabal exists, and it is full of Cooper’s medical records. Elizabeth rushes out and calls Cooper and tells him that his doctor is on Connolly’s payroll. Cooper rushes to his doctor’s office and attacks him, he accuses him of giving him fake medicine, his doctor reveals that the medicine was fake because he didn’t need it…Harold never had cancer, they faked it.

Red heads to the warehouse for the big meeting he and Dembe planned, there are a couple dozen reporters and journalists there waiting for him. He sits down and plays the video footage from the Folcrom – he explains to them that the Kabal starts war, create chaos, and make more money in one quarter than the world bank makes in a year. The Kabal controls water, weapons, information, food, and everything they need to survive. Red tells the reporters that they will be in danger and will risk their lives and the Kabal will kill some of them – but in the end the truth will prevail.

Elizabeth and Harold pay Tom Connolly a visit, they have tapes proving he blackmailed Cooper’s doctor and they have the flashdrive full of evidence against the Kabal. Elizabeth demands that he drop the case against her and prosecute Karakut for the Senator’s death and bombing. Connolly laughs that he owns the FBI, and they can’t blackmail him. They plan on extricating their entire task force, and indicting Red on murder charges. They’re even going to send Samar back to Iran, and take Ressler down for drug use. Elizabeth looses it – she pulls her gun on Connolly, Cooper begs her not to shoot. Elizabeth has a flashback of herself as a little girl shooting and killing someone, and then she pulls the trigger and kills Connolly. She drops her gun in shock, Cooper tells her to run.

The police arrive at the scene, Elizabeth calls Ressler’s cell phone while he is standing over Connolly’s body. Ressler warns her that she needs to turn herself in before he has to come and hunt her down. Elizabeth hangs up on Ressler and calls Red and tells him that she killed Tom Connolly and she needs his help. Red reassures her that he has everything under control, he shows up with Dembe. Elizabeth is sitting on a par bench – she tells Red that she remembers everything that happened the night of the fire. She understands now why Red didn’t want her to know the truth – Elizabeth shot and killed her own father. Red sits down with Liz, he says he failed her, he never wanted Elizabeth to wind up being like him. A car picks up Red and Elizabeth and they leave town together – she is officially a fugitive, at the FBI office Ressler hangs her picture up on the wall.