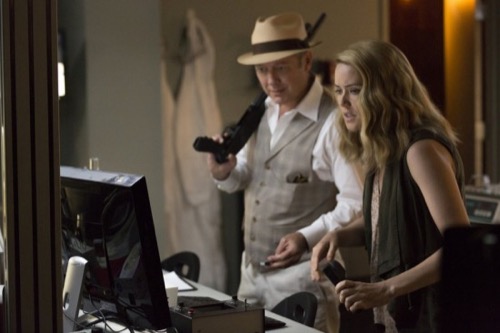 Tonight on NBC their criminal drama, The Blacklist starring James Spader continues with an all new Thursday October 15, season 3 episode 3 called, “Eli Matchett.” On tonight’s episode, Red (James Spader) and Liz (Megan Boone) head toward the Midwest in their quest to take down the Cabal and exonerate Liz.

On the last episode Liz escaped to the Russian embassy as the FBI cornered her and Red. Liz couldn’t trust no one but Red, who mobilized a lawyer named Marvin Gerard to help them evade a difficult hostage situation. Meanwhile, the FBI tried to push Cooper out of the task force. Did you watch the last episode? If you missed it, we have a full and detailed recap right here for you.

On tonight’s episode as per the NBC’s synopsis, “Red and Liz head toward the Midwest in their quest to take down the Cabal and exonerate Liz. Meanwhile, Ressler, Samar and Aram discover what could become a global food crisis.”

Tonight’s episode of The Blacklist kicks off with a heist at a farm called Verdiant Industries – men with guns kill the workers in the field and rush to building on the farm. Red and Liz arrive in Iowa – he informs her that Verdiant is part of their plan – they are going to destroy the Kabul. Apparently, Verdiant is a seed company that supplies most of the food in the company, and they also launder hundreds of millions of dollars for the Kabul. Last night a group of farmers broke in to Verdiant’s computer system and stole their trade secrets. Red wants to steal the files back from Verdiant, so that he and Liz have leverage over the Kabul.

Meanwhile, Ressler gets a visit from Tom Keen – he says he wants to help Ressler find Liz before it is too late, he is worried about her. He offers to do “illegal things” to help the FBI find Liz and Red. Ressler turns him down and puts him in to a chock hold, he says if he sees him again he will break his arm. Meanwhile, back at the office – Amar and Samar are trying to track down the crate that Liz and Red made a getaway in.

Red is concerned because Dembe doesn’t show up at the rendezvous point – he calls Glen to have him find Dembe. Then he and Liz hit the road in Iowa to track down the man that stole the seed secrets from Verdiant – his name is Eli Matchett. Little do they know, Eli has a couple screws loose, he has already killed his own men that helped him steal from Verdiant.

Meanwhile, Ressler and his team are getting closer to Red and Liz – they know that he is in Iowa, and has something to do with the hit at Verdiant. It’s no coincidence that the CEO of Verdiant, Susan Hanover, was part of the Kabul. Ressler and Saram head to Verdiant, they learn about the attack and that someone stole trade secrets worth billions of dollars. Liz and Red are still a few beats ahead of Ressler, they are at Gabriel Costa’s apartment searching for clues, he was one of Eli’s accomplices. While they are searching Gabriel’s apartment – they hear a car pull up, it’s Donald and Saram, they rush out the back door. Once Liz and Red have a safe distance between them and Ressler – Liz calls him on his cell phone and pleads with him to stop following them and give Liz space so that she can clear her name.

Little do Liz, Red, and Ressler know – Eli Matchett is much more dangerous than anyone realizes. Not only did he steal Verdiant’s trade secrets, but he has hired a lab tech to create a virus that will “bring the world to its knees.” Eli is holding the virus in a jar – it looks like a bunch of tiny bugs. Meanwhile, Liz and Red arrive at Eli’s old safe house and find all of his dead cronies, including Gabriel Costa. They go in to the back room and find the lab where the virus was created.

Saram and Ressler find the car that Liz and Red had stolen, they rush to the safehouse. Liz and Red are still inside trying to get the file off the computer. They take the flashdrive and run out of the back door, just as Ressler and Saram enter the building. Saram finds the lab – and the glass tubes full of black bugs that the technician was working on. They send the virus back to Aram, he discovers that Eli used the trade secrets to create a virus that would destroy all of the crops – and there will be a food crisis, the crops will all be destroyed and people could starve.

Ressler and Saram have the local police lock down all of the crops at Verdiant – they know that Eli Mathett is going to try and return there to release the virus. Eli Matchett arrives and tries to outrun the police – Ressler and Saram are in hot pursuit, they chase him in their car down dirt roads. Matchett finally hops out of his truck and runs in to the field carrying the glass jar with the bugs in it that will destroy all of the crops. He is about to take the cap off the jar when Ressler jumps him, they wind up beating the crap out of each other in the middle of a corn field. Saram finally arrives with her gun and they are able to take Eli Matchett in to custody.

Meanwhile, Red pays Susan Hanover a visit at her house – she’s obviously shocked to see him. Back at the office, Aram receives a fax – Liz sent him all of the files that they had on Verdiant. He realizes that Verdiant is connected to the Kabul, and calls Ressler and tells him that Liz gave them a tip and they need to search the warehouse.

Red informs Susan Hanover that the jig is up, he knows that she paid Eli Matchett to steal Verdiant’s secrets and unleash the virus. It was all a hoax – Verdiant was going to release a new seed and charge double after Eli destroyed the crops. Susan scoffs that she knew it was a mistake to hire Eli, he was obviously unreliable. Red says that he came to give her a message for the Director, he says that this is just the first of his attacks on the Kabul – and he won’t stop until the Kabul exonerates Keen.

Elizabeth and Red hit the road, she is still feeling queasy about having to shoot a cop. Red reassures her that “bad things happen to good people.” Elizabeth isn’t sure that she is a “good person” anymore. Back at the office, Ressler and Cooper are having a drink, Ressler tells Cooper that Keen is back in town – Cooper tells Ressler that working with Keen might not be the worst idea. Samar is in the interrogation room debriefing Susan Hanover and preparing to charge her. The episode ends with Glen calling Red – he has realized that Dembe was kidnapped.