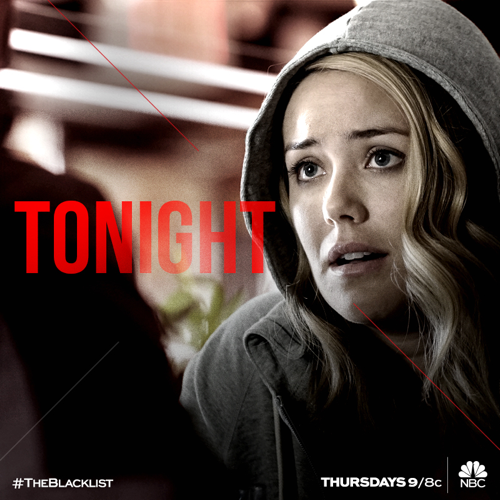 Tonight on NBC their criminal drama, The Blacklist starring James Spader continues with an all new Thursday October 8, season 3 episode 2 called, “Marvin Gerard.” On tonight’s episode, Liz (Megan Boone) escapes to the Russian embassy as the FBI corners her and Red. (James Spader) Liz can trust no one but Red.

On the last episode the FBI hunts for Liz for the murder of an attorney general in the Season 3 premiere. Also: Red and Liz try to flee the city with help from a Blacklister called the Troll Farmer; and Dembe is put in a perilous situation. Did you watch the last episode? If you missed it, we have a full and detailed recap right here for you.

On tonight’s episode as per the NBC’s synopsis, “Liz escapes to the Russian embassy as the FBI corners her and Red. Liz can trust no one but Red, who mobilizes a lawyer named Marvin Gerard to help them evade a difficult hostage situation. Meanwhile, the FBI tries to push Cooper out of the task force.”

Tonight’s episode of The Blacklist kicks off with Agent Keen at the Russian embassy, she informs them that her name is Masha Rostova, she says that she is an undercover operator for the FSB, and she completed her mission. Meanwhile, Ressler is outside with Samar and the rest of his team – he is making phone calls and trying to get the Russian embassy to hand Keen over.
Red pays a naked Russian bureaucrat named Connie a visit, his girlfriend is in the shower waiting for him. Red threatens to tell his girlfriend’s husband (a US Senator) about their affair if Connie doesn’t help him. He explains that Agent Keen is at the embassy and demanding diplomatic immunity. Red tells Connie that he needs to go to the embassy – and report to Red everything that is happening to Keen.

Elizabeth is introduced to Alexander Raskovich – the senior intelligence agent for the entire Western Hemisphere – he knows that Keen is lying and she isn’t an agent. She confesses that she came because she needs their help. Elizabeth tells Alexander that the Cabal is after her, and they are trying to reignite the Cold War. She promises to tell him everything – about Karakurt turning against Russia and joining forces with the Cabal as soon as he draws up her immunity papers. Alexander agrees to hear her out – under one condition, she has to travel with them to Moscow, and that would mean that she is officially defecting from the US government.
Elizabeth is put in to a car and they leave the embassy, Ressler tries to stop her but there is nothing she can do – because technically the car is considered Russian property. After Elizabeth leaves, Ressler receives a phone call from Red telling him not to let Liz leave the embassy – but he is too late. Red explains that the man that authorized her being moved to Moscow – was the same Russian who authorized Karakut entering the United States. Vladimir is working for the Cabal, and he is serving them Agent Keen on a silver platter.

Ressler chases after the convoy and gets in a shoot-out while they are racing down the road. The car that Liz is in crashes, she shoots the driver and hops out of the car and runs down the street. Ressler screams after her, but Elizabeth is gone. She takes out a burner cell phone and tries to make a call. She receives a message – it says “1425 Peabody.”

Agent Keen heads to the address to meet up with Red, he fills her in on the Cabal – and tells her that as soon as she left US soil the Cabal was going to have her killed. Ressler heads back to the office and the Captain is not happy – she demands to know what he was thinking. Ressler explains that Keen’s convoy was compromised and she was being abducted by the Cabal. They plan on questioning the driver of Elizabeth’s car as soon as he wakes up, he is in the hospital. Unfortunately, someone is in the hospital right now poisoning him and killing him off so that he can’t talk.

Someone calls in a tip to the police that Agent Keen is at the diner – two cop cars pull up. Red heads outside and shoots the cop car with a rifle, and then he goes back inside and takes all of the people at the diner hostage. A few minutes later, the FBI arrives outside. Ressler and Samar arrive and learn that Red and Keen are both inside. Ressler walks right up to the diner door – he tells them that they have zero leverage. Red says he wants the power turned back on to the diner, and he wants an armored village to drive him to an airstrip – and he wants a man named Marvin Gerard. He tells Ressler he has 90 minutes, or else he is going to start killing the hostages.

Ressler brings Marvin Gerard straight from prison, apparently he is an attorney and one of Red’s oldest friends. He gets to work on the transcripts from the Falcrom that Red has. Meanwhile, one of the people at the diner tries to tackle Elizabeth and take her gun, she fights him off and beats him up. He is in bad shape, she kicked him so hard that his lungs collapsed – he needs medical attention or else she will have a murder on her hands. Outside, Ressler listens to the 911 call that came in saying that Red was at the diner – he is shocked when he realizes that it was Red that called the tip in on himself. That means that Red totally played them.
Ressler and his team rush the diner, they are baffled because Red, Liz, and Marvin are gone. They actually took a hidden elevator down in to the basement of the building – Red had their escape planned all along, he just wanted Marvin Gerard first. Red, Marvin, and Elizabeth make their getaway – Red has a car waiting for Marvin. He sends him to a banana plantation that he owns, and tells him to use the Falcrom transcripts to come up with a plan to save him and Lizzie.

Back at the office, Ressler and Samar are trying to put it all together. Ressler says that they are “back to square one.” Liz and Red head to a secret house, Elizabeth is having a meltdown – she feels horrible about puncturing the guys’ lung at the diner. She doesn’t understand how Red does it – how he doesn’t care that people are terrified of him. Red explains that since he was a little boy, he always wanted to be the captain of a ship and sailing around the world. No one ever really knows anything about him, or anyone else at all.