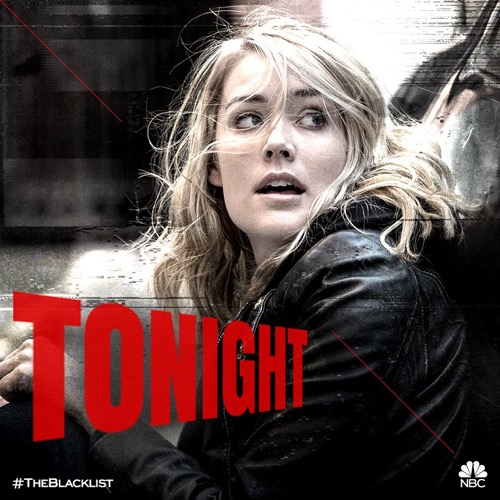 Tonight on NBC their criminal drama, The Blacklist starring James Spader continues with an all new Thursday October 29, season 3 episode 5 called, “Arioch Cain.” On tonight’s episode, a bounty is posted for Agent Keen, (Megan Boone) with any number of shady assassins surfacing and Red (James Spader) setting out to protect her.

On the last episode Red enlisted a task force to locate the Djinn, an enigmatic woman who fulfilled revenge fantasies. Red and Liz believed the Djinn can lead them to the Cabal and helped them exonerate Liz. Did you watch the last episode? If you missed it, we have a full and detailed recap right here for you.

On tonight’s episode as per the NBC’s synopsis, “an enormous bounty is posted for Agent Keen drawing out any number of unknown assassins while the FBI and Reddington join forces to protect her.”

Tonight’s episode of The Blacklist kicks off with a live news report showing pictures of Elizabeth Keen lying dead on the floor in a pool of blood. Red had a photographer come in to what looked like an airport hangar and take the photos, she asks Red if he thinks it is a good idea. He says he wants everyone to know “what really happened there.”

Flashback to 12 hours earlier, Tom is briefing Cooper on his meeting with Asher Sutton. He reassures Harold that Asher is his key to Karakut. He says that Asher just wants to know “how the other half lives.” Apparently, Tom wormed his way in to Asher’s world and got an invite to his engagement party.

Red arrives at the safehouse, he says that they have to move ASAP. He tells Elizabeth that Wendigo is coming for her – he is a nameless killer that hunts targets that he thinks are a threat to society, Wendigo is a vigilante of sorts. No one has any idea who he really is. Red tells Liz that his team will be picking her up any minute, he is going to get help.

Red tracks down Ressler, he tells him that an assassin is after Elizabeth. He needs Ressler’s help – he is in over his head with Wendigo. Ressler rushes back to the FBI office and briefs Samar and Aram on Wendigo. The only hit they have in a forensic database on Wendigo is that he uses handcrafted weapons and homemade bullets. He tells Samar and Aram to get to work, and then he rushes off to the Presidential Commission.

While Elizabeth is leaving the safe house to get in a car with Red’s two men, a sniper shoots and kills both of the guards. Elizabeth manages to steal a car and get away unscathed, but the two men that were supposed to be protecting her are dead. Meanwhile, Ressler heads to the Presidential Commission and he is questioned relentlessly. Ressler informs the head of the President’s security that he thinks Elizabeth Keen is innocent, and she is not a terrorist.

Samar heads to the alley where Elizabeth was shot at, she finds a bullet that has the word “Psalm 1:1” engraved on it. Samar says Psalm 1:1 reads, “Blessed is he who walks not in the council of the wicked.” Meanwhile, Red picks Elizabeth up a few blocks away in his car. She is still a little shaken up, he thinks he may have a link on Wendigo. He knows the gunsmith named O’Toole that makes his weapons.

Elizabeth and Red track down O’Toole, and after Red threatens him he gives up an address. Liz and Red head to the building, and while Liz is trying to pick the lock to get in – Windego opens fire. They chase him over several buildings, until he winds up hanging from a ledge. Red offers him a hand, but then he laughs in Red’s face. He says that Liz “can’t hid from him and there are more coming,” before he falls to his death.

The FBI finds a “Wanted Dead Not Alive” poster on Elizabeth Keen, there is a $700,000 bounty on Elizabeth’s head. All the killer has to do is prove they killed her with a trademark like Windego’s Psalm bullet, the date that they killed her, and what method they used to kill her. Someone posted the bounty named “Arioch Cain.” Aram has been trying to take the site down, but it is impossible – whoever behind it is a pro.

Meanwhile, Red and Elizabeth meet up with Edward – he is furious when he realizes that Dembe isn’t with him. He lies and tells Red that Solomon killed him, Red believes him and says that they are going to avenge Dembe. He has Edward call Solomon and set up a meeting place. When they arrive, Red can tell that it is a set-up, but he is already caught. Solomon arrives, he warns Red that if he tries to fire his gun – he and Liz are both dead.

At the FBI, Samar brings in Gavin Delgado – he is the person who put Elizabeth’s bounty up on the “Wanted Dead Not Alive,” Aram sits down with him in the questioning room. He pleads with Gavin to take down the site. Gavin insists that he didn’t choose the target, the people did. Aram threatens him with a computer virus, and then he realizes that Gavin can’t take Elizabeth’s name off from the site – but the person that nominated her can take it down. He rushes out of the room.

At the hangar – Solomon’s men put Elizabeth in a metal box. Red pleads with them, he promises to give up everything they have on the Director, but Solomon says it is too late. Meanwhile at the engagement party, Asher opens up to Tom and reveals that he is being extorted for $20,000 a month because he didn’t throw a boxing fight. He is in deep.

Moments before Solomon slits Elizabeth’s throat – Dembe arrives at the hangar. He saves Liz and Red, and shoots all of Solomon’s men. Solomon manages to get away. Then Dembe drops to the ground, because he is injured. Red calls an ambulance and gets Dembe medical care ASAP. Red calls Aram and demands to know if he got Liz’s name off the site yet. Aram rambles that it is impossible, the only way to get Elizabeth off from the website is if she is dead.

So, Red stages the crime scene at the hangar to make it look like Elizabeth is dead. He tells the photographer to get the photos to all of the major news outlets. Back at the FBI, Aram and Samar have Gavin update the website to say that Elizabeth is dead. Elizabeth and Keen track the routing number for the bounty to a man’s house named Arioch Cane. When they arrive, they both point their guns in his face. He insists he has no idea what they are talking about. Arioch’s teenage daughter interrupts and says that she is the one who put the bounty on Elizabeth.

Elizabeth and Red realize that Blaire’s mother died in the Orea Building – she thinks that Elizabeth killed her. Elizabeth tries to reason with Blaire, she tells her that she lost her mother too. She gets teary eyed and swears that she had nothing to do with her mother’s death, and she promises to find the person that did as soon as Blaire takes her off from the website. Blaire takes out her laptop and deletes the bounty on Elizabeth’s head. She promises to find her mother’s killer and bring them to justice before she leaves.