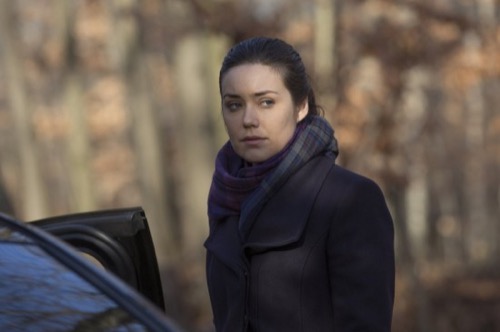 Tonight on NBC their criminal drama, The Blacklist starring James Spader continues with an all new Thursday February 12, season 2 episode 11 called, “Ruslan Denisov” and we have your weekly recap below. On tonight’s episode, the team aims to take down a menacing abduction master when an undercover CIA agent is kidnapped.

On the last episode as chaos ensued at the Factory leaving the fate of Red (James Spader) and the task force unknown, FBI boss Cooper (Harry Lennix) struggled to rescue his team from the detention facility. Meanwhile, it was a race against time to stop Luther Braxton (guest star Ron Perlman) from attaining confidential information. Megan Boone, Diego Klattenhoff, Amir Arison and Mozhan Marno also starred. David Strathairn and Janel Maloney guest starred. Did you watch the last episode? If you missed it, we have a full and detailed recap right here for you.

On tonight’s episode as per the NBC’s synopsis, when an undercover CIA agent is kidnapped by a band of separatists in Uzbekistan, the task force sets a rescue mission in motion. Red (James Spader) informs Agents Keen (Megan Boone) and Ressler (Diego Klattenhoff) that they are up against “Ruslan Denisov,” (guest star Faran Thair) a very dangerous past associate. Harry Lennix, Amir Arison and Mozhan Marno also star.”

Tonight’s episode of The Blacklist kicks off Uzbekistan, men in black masks with machine guns rush in to a church. The priest begs for his life, the men pull a cell phone out of his robe and tell him to “talk to his Gob” while they hold a machete to his neck.

The police are at Susan James’s house in America, her husband is missing. Her husband is the security guard that was murdered at the marina when Elizabeth was holding her husband hostage. Susan tells the police about his run-in with Elizabeth – and gives them her business card with all of her information on it. She thinks Elizabeth is responsible for her husband’s disappearance.

Red arrives at the office and interrupts Liz and Aram – she gave Aram the micro-chip she found in her childhood stuffed rabbit and told him to figure out what it is. Red informs her that they have a new case, Liz doesn’t want to hear it she knows that all he cares about if the Folcrom, not her. He hands her a newspaper saying that a priest in Uzbekistan was kidnapped. Red reveals that the priest isn’t actually a priest, Father Nahiab is actually an undercover CIA agent. Red knows who kidnapped Nahib, his name is Ruslan, he is commands a group call SRU, the “Supreme Republic of a Free Unbekistan.” Red admits that he used to do business with Ruslan, but he has become far too dangerous to contain.

Elizabeth briefs her team on Nahib’s kidnapping, it’s not his MO. Usually Ruslan kidnaps executives of high-profile companies for ransom, they aren’t sure why he is going after a CIA agent. Cooper meets with the power that be and they bicker over who’s jurisdiction it is. They decide that Cooper’s FBI team can do surveillance in Uzbekistan and handle any hostage negotiations.

Liz and Donald arrive in Uzbekistan, they don’t exactly receive a warm greeting. They are being watched by Ruslan’s men as soon as they step off the plane. The ambassador orders them to hand over their fire arms before they check in to the hotel. Liz and Donald find Red in the lobby – and they demand to know what he is doing there, Red says that he “came to help” and offers to take them to dinner after they freshen up. Liz and Donald get in to the elevator and the lights go out and bags are put over their heads. Ruslan and his men have taken them hostage as well.

Ruslan takes them to his headquarters and says he has been trying to get America’s attention for a year now, and he doesn’t need America’s money. He has cages of men that he has kidnapped, he jokes that business is good. Ruslan explains that an oil pipeline was put in Uzbekistan, and now it is leaking and killing thousands of their villagers. He has tried to reason with the company and they won’t listen about the chemical damage their pipeline is doing. He pulls a man out of a pool of water, and his skin is peeling off. Ruslan explains that the water he dipped him in is the same water the people of Uzbekistan drink and bathe in. He gives Liz and Harold the man back as a “sign of good faith” and has them transported out of his lair. They rush the man to the hospital and learn his name if Jeff Conover, and he is one of the executives of the oil company that put the pipe line in Uzbekistan. Liz calls Harold to fill him in – and tells him about the rest of the hostages in the lair. She has no idea where the lair is nor how to get back there though.

At the medical center a man rushes in and introduces himself as Dean Walker, he works at the company Anikan and thanks Harold for rescuing their employee Jeff. Dean explains that their pipeline is safe, and says that Ruslan is sabotaging them and he is the one poisoning his own people. Harold heads to dinner with Red, and he and Liz are under strict orders from the Uzbekistan army that they can’t leave the hotel. They are furious that Liz and Harold have been working with Ruslan. Later that night Liz and Harold sneak through the elevator to meet with Ruslan. They arrive at the lair and Ruslan informs them that he has brought in a professional to negotiate with them on his behalf. Liz and Harold are shocked when Red emerges and introduces himself as if he doesn’t know them, he is Ruslan’s negotiator.

After they leave – Liz demands to know what Red is up to. Why would he give them the case, and then help Ruslan and work against them? Red and Ruslan take Harold and Liz on a tour of Uzbekistan, he shows them all of the clinics that have been set up to treat the poisoned people, and the water and food supply that has been destroyed. Harold asks Ruslan is it is really a scam and he sabotaged the pipe line. Ruslan scoffs that his brother died last year from poisoning from the pipe line.

After their meeting Liz receives a phone call from a police officer named Wilcox. He says that he is investigating a missing person on Ames. Liz tells Wilcox that she can’t discuss why she was at the marina because it is privileged information, and there were no hostages on the boat, it was just a cover. The detective isn’t happy and says that Liz has to tell him something, Liz says she can’t help him and wishes him luck in finding Ames.

While Liz and Cooper are out to dinner with Red the Uzbekistan authorities raid Ruslan’s lair and murders half of Ruslan’s men. Ruslan had already moved the hostages, and none of them were recovered. Red is furious, he calls Cooper and curses him out. Cooper explains that it wasn’t the FBI that took Ruslan’s lair, it was the CIA. Cooper reassures Red that he will deal with Hayworth. Red doesn’t want to hear it, he says that he can’t trust Cooper anymore and now Ruslan isn’t going to trust him anymore. Red meets with Ruslan and tries to talk some sense in to him as he nonchalantly starts killing off his hostages because he is so upset that he was betrayed.

Red stops Ruslan from killing the priest, and explains to Ruslan that the priest was placed in Uzbekistan by the CIA which means that he is valuable and has information. Ruslan threatens to shoot the priest, and he spills the beans and says that a Uzbekistan leader named Jabin took a huge pay out from the oil company and let them build the pipeline. Red pays Jabin a visit. Meanwhile, back at the hotel Liz confesses to Harold that she is in serious trouble and tells him about Ames and the missing person report. Meanwhile back in the states Wilcox is questioning Sam, the body guard that Liz hired to watch Tom while she was at work.

Red and Liz have a sit down with Jabin and the CEO of the oil company. Jabin insists that he sold the rights to them in 1988 – and the first line was a disaster and hundreds of villagers were killed and then the Soviet Union collapsed and all hell broke loose. The oil company paid Jabin to cover it up. The CEO says that Jabin is a crazy old man, Red laughs that Jabin kept copies of the original contract he made with Annika. The CEO says that Annika can fix it and they will pay for medical bills, etc. Red says that is not an option, Ruslan doesn’t want the CEO’s promises or money – they want the company to pack up their pipeline and leave Uzbekistan for good, if they are not gone in 24 hours then Ruslan and his people are going public. Back in the states, Wilcox is cutting a deal with Sam who offers to take him to the marina and show him Ames’s body.

Liz and Harold meet with Ruslan to get the rest of the hostages, unbeknownst to them the CIA is planning to make his own move. He has ordered the CIA to take out Ruslan and Red. They are in the woods at the meeting place with their sights of their guns on Red and Ruslan. Cooper storms in to Hayworth’s office and calls him out on what he is doing, Hayworth radios his men in the woods and tells them to “stand down.” Before Red leaves he gives Ruslan a pep talk, he tells him that he could run Uzbekistan if he wanted to, he may go to prison for a bit, but he will emerge a hero.

Back in the states, Aram visits Liz and says that the chip is a recording device fro the early 90’s but he has no idea how it works or what it does. Aram thinks that Liz should talk to Red about it, Liz orders him not to breathe a word of it to Red. At the beach Sam has led Wilcox to Ames body, he tells the officer that he isn’t going to believe what he has to tell him about Elizabeth Keen.