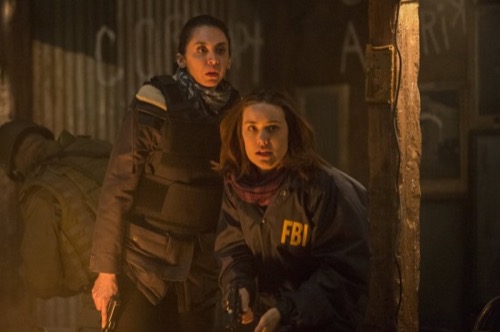 Tonight on NBC their criminal drama, The Blacklist starring James Spader continues with an all new Thursday February 19, season 2 episode 12 called, “The Kenyon Family,” and we have your weekly recap below. On tonight’s episode, the team investigates the vanishing of a polygamous cult leader.

On the last episode when an undercover CIA agent was kidnapped by a band of separatists in Uzbekistan, the task force set a rescue mission in motion. Red (James Spader) informed Agents Keen (Megan Boone) and Ressler (Diego Klattenhoff) that they were up against “Ruslan Denisov,” (guest star Faran Thair) a very dangerous past associate. Harry Lennix, Amir Arison and Mozhan Marno also star. Did you watch the last episode? If you missed it, we have a full and detailed recap right here for you.

On tonight’s episode as per the NBC’s synopsis, “the team investigates the vanishing of a polygamous cult leader with dangerous shipping containers buried on his property. Meanwhile, Red seeks a hidden safe.”

Tonight’s episode of The Black List kicks off with a preacher in church giving a sermon to a couple dozen people. Meanwhile out in the cemetery in the dark, an employee finds his partner knocked out and laying in the grass. Someone hits him over the head too and knocks him out. Inside the church the preacher brings a child bride up to the altar, and prepare to marry her. The doors of the church are locked, and someone throws smoke bombs through the window to interrupts the nuptials.

Elizabeth heads to the DMV to meet up with Red, she jokes that of all places he had her meet him in the DMV and she has never even seen him drive. Red wants to talk about Justin Kenyon, the face of the “Militia Movement.” Elizabeth says forget it, his church is full of polygamy and child abuse and he is surrounded by over four high-profile attorneys that protect the cult. Red tells Elizabeth that Kenyon has four cargo ships buried on his property and he rents them out as storage facilities to cartels, since American police don’t step foot on his cult’s property.

Kenyon has fallen off the radar, and no one has been able to make contact with anyone on his compound in over a week – Elizabeth briefs her team at the FBI office. She explains that there are a lot of angry criminals right now that want the weapons and drugs they have stored on the compound – and they can’t get to them. Meanwhile, Red harasses an employee named Glenn at the DMV, he explains to Glenn that Alan Fitch told him about a safe in St. Petersburg on the 2nd floor of a building – and then he died. He needs to find the safe.

In Huntsville, Alabama two patrol officers find a white van pulled over on the side of the highway. They learn that the van has been reported as stolen, and they pull their guns and head out to investigate. While they are looking through the windows – the entire van explodes and goes up in flames, police officers and all. Harold and Elizabeth receive video footage of the explosion and learn that the van is registered to Kenyon’s compound and the explosives came from the cult, they also trace another white van that was also stolen at the same time and put out an APB on it in hopes of stopping another explosion. Harold orders Elizabeth and Ressler to go to the compound – and says someone will meet them there with a warrant.

Samar heads to the scene when they find another white van on the side of the road. She realizes there is a suicide bomber sitting inside waiting for the police to get close enough so they can push the button and set off the explosives just like the last white van. She approaches the van and realizes it is a small child – she manages to talk him down and get him out of the van instead of blowing it up. Meanwhile Ressler and Liz hit Kenyon’s compound and are shocked to find the church doors locked, they head inside and find 53 dead bodies – it looks like a massacre. Even more puzzling is the fact that Justin Kenyon is not there, and every child that lived on the compound is missing along with him. Donald heads down to the storage units and everything is gone – 12 units full of guns and bombs have been taken, but he does find a little girl hiding.

A woman named Donna arrives at the FBI office and swears to Samar that the child she found in the van, Finn, is her son. She used to be a member of Justin Kenyon’s cult but she defected and they wouldn’t let her take her son with her. Donna cries to Samar that Justin Kenyon wanted every man to have three brides, but there was a flaw in his plan because there were more men than there were women. So he created a lottery and every year they would select boys to be “awakened” and after a feast they would take the young boys out in to the woods and leave them there to die. Apparently, all the boys that Justin cast away in to the woods joined together and built an army of “Watchers” and they fought back.

Meanwhile, back at the compound Ressler and Liz are leaving in a truck with the little girl that they found hiding in the container. One of the “Watchers” runs through the woods and shoots out the FBI’s agents tire in their truck. The truck crashes in to a tree, and the radio in their SUV is ruined, they have no cell phone service. Liz sees some smoke over the hill, she tells Ressler and a officer to watch the little girl and says she is going to go look for help. Ressler is trapped in his seat by a tree branch, suddenly a bunch of the Watchers jump on the hood of the car and began ripping the windshield off and doors open. They rip the doors off the car and take the little girl from Ressler. Liz returns to the crashed SUV and find the sheriff dead and bloody –

Ressler and the little girl are gone. The Watchers arrive and take her hostage as well.

Samar and the rest of the team rush to the compound when they can’t get a hold of Ressler and Liz. Red calls Samar and says that there are three hellfire missiles that were stolen from the compound – and he got the passwords to them so he can track their coordinates, they are hoping that they took Liz and Ressler to the same place that they took the missiles.

The FBI agents storm the cave where the Watchers are keeping the missiles and Liz and Ressler, Liz manages to get a rifle away from one of the Watchers and they take some of the prisoner, but the majority of them disappear out the back door. Once Liz and the FBI has seized the cave, they find Justin Kenyon’s dead body – the boys shoved a cross down his throat and two stakes through his eyes.

Liz tells the FBI agents to round up all of the kids and get them out of the woods ASAP. She finds Justin Kenyon’s son David sitting in a white van rigged with explosions. While Liz is talking Justin down, one of the FBI agents shoots and kills Justin and another young boy. The FBI seizes what is left of the explosives and heads home.

Liz arrives back at the office, Red is waiting for her – he tries to give her a key to a new apartment in a fancy building that he bought for her. Red wants her to move out of the motel that she has been staying in, Liz refuses to take the key. She tells Red to just let things be and says that “all it will eve be between them is just business.”

Red heads to the cult’s compound the next day and it appears deserted, he searches the church for a key and heads to the storage containers – inside one of the is an antique car. He turns the car on and opens the trunk, all that is inside is a small brief case, he takes the brief case out of the car and leaves. He gets ready to leave and he takes out the business card that he found in Fitch’s safe. He calls the number on the card and says that he is “calling on behalf of Fitch.”