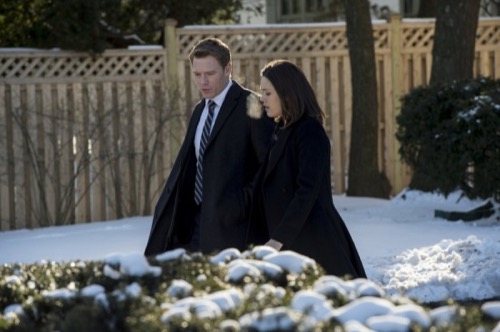 Tonight on NBC their criminal drama, The Blacklist starring James Spader continues with an all new Thursday February 26, season 2 episode 13 called, “The Deer Hunter” and we have your weekly recap below. On tonight’s episode, the task force targets a serial killer who tracks his victims like prey.

On the last episode the team investigated the vanishing of a polygamous cult leader with dangerous shipping containers buried on his property. Meanwhile, Red sought a hidden safe. Did you watch the last episode? If you missed it, we have a full and detailed recap right here for you.

On tonight’s episode as per the NBC’s synopsis, “the task force targets a serial killer who tracks his victims like prey. Meanwhile, suspicions rise about a possible murder as Liz tries to keep her secret from being exposed.”

Tonight’s episode of The Blacklist kicks off with Elizabeth briefing her team on the “Deer Hunter,” she says the offender is a middle-aged white male who is seduced by the ritual hunter, he kills them with a cross-bow with one shot straight to the heart. The “Deer Hunter” guts his victims with surgical precision, then he carves out the liver and takes a single ceremonial bite of it.

Meanwhile, Liz’s bodyguard Sam is still sitting in an interrogation room with Detective Wilcox – the detective explains to him that he has to testify against Liz in court when she is charged with murder and if he changes his story one bit, he will lose his immunity deal.

Red is standing at a payphone chatting with the person whose business card he found in Fitch’s safe. The person refuses to disclose their identity and sets up a meeting in person with Red tomorrow at 2:00 PM. Liz walks up and Red hangs up the phone. He demands to know where the Folcrom is, Liz lies and says she doesn’t know anything about it. Red can tell that she is lying, he offers to help her find the “Deer Hunter,” if she tells him where the Folcrom is. Liz agrees and Red heads inside, he announces that the reason that they can’t find the “Deer Hunter” is because they are looking for a man and the serial killer is actually a woman.

Liz and Ressler head to the morgue for the autopsy report on the “Deer Hunter” latest victim, when they arrive the coroner says that someone tampered with the body while he was out of the room. Liz and Donald see a man running down the hallway, they chase him down and hold him at gunpoint – Liz recognizes him from her lecture earlier that day on the “Deer Hunter.” They bring the man in for interrogation, he insists that he just writes for a crime blog. The crime writer points out that the techniques on the last six victims were not the real “Deer Hunter,” he says they have a copy cat killer on their hands.

Liz receives a phone call from Detective Wilcox, he informs her that he found her body guard Sam and he says that Liz and her husband killed the harbor master. Liz once again says that she was at the harbor on a classified case and she can’t disclose any information. Wilcox taunts her that he is pressing federal murder charges against her, and then the judge will subpoena her “classified case.”

Liz takes Ressler aside and tells him that Wilcox is taking the case to a federal judge and pushing for murder charges. Ressler tells Liz she needs to come clean to Cooper about everything now, she didn’t kill the harbor master, Tom did. And, there is no reason she should go down for the crime.

Ressler runs tests on the bite marks out of the Deer Hunter’s liver, the dental imprints don’t match. The crime blogger was right – they are dealing with a copy cat killer, or more than one “Deer Hunter.” Another one of the “Deer Hunter” victims are found hanging from a tree and gutted – Ressler and Liz head to the victim’s wife’s house – it’s Mary. She acts strangely while they discuss her husband’s death with her, Ressler can tell that something is up.

Red missed his date with the mystery man, he sent Dembe to answer the payphone and try to reschedule. The mystery man says that he hopes whatever Red was doing was worth it – and he hangs up on Dembe. Meanwhile, Red is visiting Liz’s former guard Sam. He is being transported to another prison – Red climbs in the car with Sam and says that he knows his brother is on a heart waiting list. He tells him he can get him a heart within a week if Sam does something for him.

Samar and Aram finally found something tying all of the copy cat “Deer Hunter” victims, the last seven men that were killed were all obsessed and abusive towards their wives or girlfriends. All of their wives/girlfriends were members of a national organization of abused women. Liz and Ressler head to the organization, White Haven’s headquarters – they explain to the woman in charge that the last seven men that were killed all of their victims were in White Haven. They think that the “Deer Hunter” might work at White Haven, the woman in charge promises to get them all of the information that the need and send it over to their office. Meanwhile, the “Deer Hunter” is in the lobby listening in on their conversation.

Red visits Aram at the office, he gives him the payphone number and tells him that it is urgent and he needs him to trace the mystery man. Aram whines that he doesn’t have a warrant – but Red doesn’t want to hear it.

The “Deer Hunter” pays Mary a visit and is freaking out because the FBI are on to her. Mary insists that she didn’t rat her out. The Deer Hunter hits her over the head with a cutting board and runs out the back door when she sees Liz and Ressler pull up to the house. Liz chases the Deer Hunter through the back yard and she hits Liz over the head with a shovel and drags her back to her headquarters without Ressler even noticing. Liz wakes up inside the shack and tries to fight off the Deer Hunter, but she hoists her up in to the air and has her suspended from the ceiling in a harness, Liz can’t defend herself. Meanwhile back at the office Aram has a lead on the copy cat killer – he finds out that her name is Tracy, and she was the first woman whose abusive husband was killed by the Deer Hunter.

Tracy is covering the floor with newspaper and preparing to gut Elizabeth, she chats with her and reveals that her husband was the real “Deer Hunter,” and that was how she knows his MO. Tracy rants to Liz about the night that she found out her husband was a serial killer. Tracy reveals that when she figured out her husband was the “Deer Hunter,” he tried to kill her so she defended herself and shot him in the heart with a cross bow, and then he could never hurt her again. So, she wanted to help other women who were abused by their husbands too. Liz provokes Tracy and she attacks her and Liz proceeds to try and strangle Tracy with her legs – Ressler and the rest of the team rush in seconds before Liz kills Tracy and scream at her to let go of the killer.

Once Tracy is taken in to custody, Ressler tries to talk to Liz. She has a meltdown over letting Tom kill the harbor master, she realizes that she stood by and let him kill the harbor master so she is just as much a killer as Tom is. She announces she is going to see the detective and come clean about what happened – Ressler tells her that is not an option and it is their job to protect people.

Meanwhile, Sam is being deposed by the federal judge – they ask him to repeat on camera what Liz did to the harbor master but Sam changes his story and says that he “doesn’t remember.”

Aram calls Dembe and gives him the address where the mystery man was calling Red from. Red and Dembe rush to the address with their guns drawn, they search the apartment and find blood on the floor and the furniture ransacked. Red takes out his phone and calls the number on the business card – he finds a cell phone vibrating under a chair.

Red meets up with Liz at a café, he lectures her for chasing after a serial killer without back-up and nearly getting killed. Liz confesses to Red that she has the Folcrom, she says that she will give it to him as soon as he tells her what it is. Red tells her that he has already paid her and he took care of the harbor master murder case. He taunts Liz that she is scared to hand it over because once he has the Folcrom she thinks that Red will disappear and she will never see him again. Liz storms off.