The Bold and the Beautiful (B&B) Spoilers: Is Nicole Pregnant With Zende’s Baby or Rick’s – Paternity Disaster Looms? 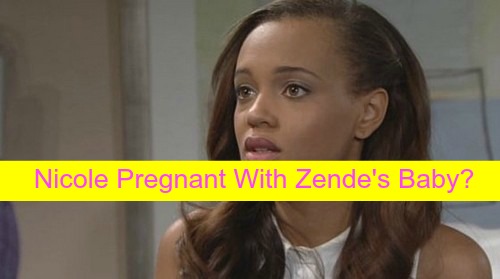 “The Bold and the Beautiful” (B&B) spoilers tease that Nicole’s [Reign Edwards] surrogate pregnancy may end in a quite a shocker. Zende [Rome Flynn] manipulated Nicole into agreeing to reconsider being Maya’s [Karla Mosley] surrogate by attempting to make love to her.

Maya has laid a guilt trip pretty thick where Nicole is concerned; Nicole [falsely] believes that she owes much of her recent success to her older sister’s influence in her life. She thinks that she owes Maya – in fact, Nicole told her mother that she owed Maya this one thing she desperately wants – a child. Nicole has stated many times that she cannot go back on her word because she promised Maya that she would have her baby for her.

According to the Internet rumors, it suggested that Nicole may already be with a child by Zende or might soon become that way after the insemination. Wouldn’t that be a game changer when the baby comes out – looking like the papa, Zende? As it stands right now, Maya will be coddling her throughout her pregnancy, asserting herself in Nicole’s daily activities, including her food intake, work load, and exercise regimen.

The fertility doctor asked Nicole if she had slept with anyone in the past 30 days. At the time, she was not sexually active with Zende; it happened right after the appointment. So now that they inseminated her with Rick’s [Jacob Young] sperm, it won’t be clear until birth whose child she is carrying – Rick’s or Zende’s.

No matter how it turns out, this storyline is headed to create major disaster.

Nicole is NOT prepared for the demands of pregnancy and childbirth at such a young age. Her reasoning for going through with this terrible idea are noble, but it will end in disaster.

Nicole’s baby will likely belong to Zende after Rick, and Maya had bonded with the infant and felt connected to the baby during the pregnancy. Nicole won’t have the heart to tell her that there is a small chance the baby COULD be Zende’s. After all, if she disclosed that information, Maya would come unglued, not to mention Rick!

Another possibility is that Rick will see Nicole’s stomach grow with his child, and he will start to pull away from Maya – and closer to Nicole. Rick may start to question why he stayed with Maya, someone who will never be able to bare children for him.

Do you think Nicole will be pregnant with Zende’s baby? Do you think the pregnancy could cause Rick and Maya’s relationship to crack? Don’t forget to come back later for juicy “The Bold and the Beautiful” spoilers, rumors, and updates!