The Bold and the Beautiful (B&B) Spoilers: Bill Angered by Ridge – Things Get Ugly at Explosive Staff Meeting 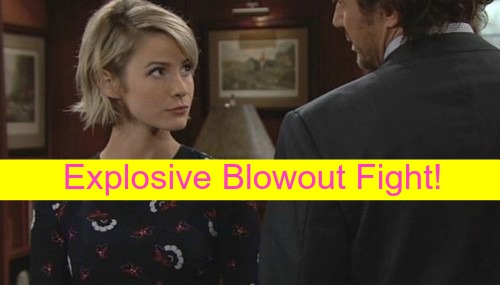 “The Bold and the Beautiful” (B&B) spoilers for Thursday, November 5, tease that Bill’s (Don Diamont) beef with Ridge (Thorsten Kaye) will continue. Bill isn’t happy about Ridge sitting on the throne at Forrester Creations and he certainly doesn’t approve of his control over Liam (Scott Clifton) and Wyatt (Darin Brooks).

Bill’s boys have to do their jobs and that forces them to please Ridge. Of course, that doesn’t mean Bill has to like it. Bill is very protective of Caroline (Linsey Godfrey) as well. Now that Caroline is married to Ridge and they’re starting a family, Bill is more enraged than ever.

Bill will suggest that he’ll always be wary of any interaction between his family and the Forresters. Katie (Heather Tom) will probably encourage Bill to settle down and learn to live with it. However, Bill does have a point about the ongoing tension. In fact, it looks a new battle is heating up for a Forrester and a Spencer.

“The Bold and the Beautiful” spoilers say Thomas (Pierson Fode) will find himself longing for Ivy (Ashleigh Brewer). You can bet that Ivy’s boyfriend won’t appreciate it. Wyatt is tired of having to share women and he’ll want to stop this before it goes any further.

Luckily, Wyatt may get some unexpected help in the form of a distraction. B&B rumors hint that Ridge and Caroline’s secret could blow up soon. Perhaps Thomas will be too wrapped up in the baby drama to worry about his little crush.

Still, Thomas’ flirtations could drive a wedge between Ivy and Wyatt. Ivy may realize that she’s not as satisfied with her current relationship as she thought she was. After all, Wyatt was definitely a rebound. Most couples tend to break up and make up plenty of times on a soap. Ivy and Wyatt’s romance will undoubtedly face more strife in the future.

Speaking of strife, we’ll sure get a lot of it at the next Forrester Creations staff meeting. That’s not too surprising. Meetings at Forrester are usually full of outbursts and hot tempers. Who will explode this time? It’s tough to say, but it should cause a stressful day at the office. Stick with “The Bold and the Beautiful” for updates on the latest crisis.

So B&B fans, what do you think about the news that Bill will be angered by Ridge’s interaction with the Spencers? Will Wyatt try to get Thomas to back off? Will the staff meeting turn into a circus as usual? Let us know what you think in the comments below and don’t forget to check CDL often for the latest “Bold and the Beautiful” spoilers, rumors, updates and news.