The Bold and the Beautiful Spoilers: Is Thorsten Kaye Leaving B&B – Rumors of a Ridge Recast? 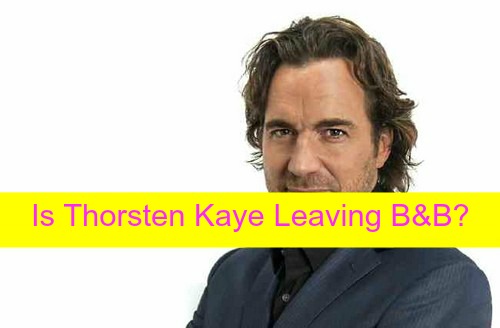 “The Bold and the Beautiful” spoilers tease that Thorsten Kaye may be planning a shocking exit from the hit CBS soap opera. Kaye debuted as Ridge in December 2013- and the fans have yet to accept him in the role. Is it possible that Thorsten Kaye could be considering leaving the show and NOT renewing his contract with the soap?

Thorsten Kaye sat down with Soaps in Depth a few weeks ago, candidly revealed how draining the commute from New York to Los Angeles has been on him over the past two years. He noted that he was thankful for his role, but after a while it seems like all he does is travel or recuperate from jet lag. Thorsten Kaye detailed his schedule and it sounded extremely exhausting. Would Thorsten consider walking away from “The Bold and the Beautiful” due to the traveling woes?

When the rumor started last week, fans were not exactly upset about the prospect of losing Kaye. In fact, many hoped that he decided to exit the iconic role, leaving the opportunity for Moss to step into the role. There has not been a confirmation that Ronn Moss would consider returning to his former role.

If that isn’t a reason enough, another speculated reason he could leave the show is due to the fact the fans haven’t exactly embraced him in the role. It is a difficult thing to step in an iconic role such as Ridge Forrester. Usually, the recast will either excel in the role or disappoint the fans immensely.

The fact is, even the most seasoned veteran actors can struggle to make an established character their own role. The fans have stated over and over, they wished that TPTB would not have recast the role, leaving it open for Ronn Moss.

One point in Thorsten’s favor is his chemistry with Linsey Godfrey. In fact, they work so well together that it has been his selling point, recently. If he left the show, the show would suffer at the moment, with the paternity mishap of Caroline’s [Linsey Godfrey] baby.