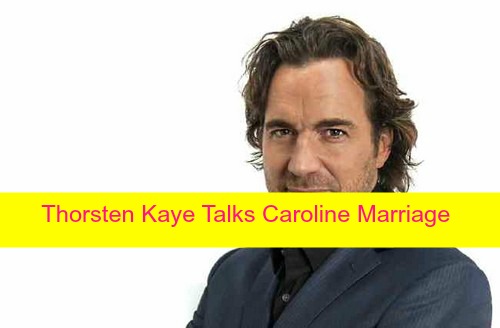 “The Bold and the Beautiful” spoilers discuss Thorsten Kaye’s interview when he sat down with Soap Opera Digest for the October 19 edition. Thorsten talked about traveling coast to coast every week, his daytime future, and missing his kids while working. ‘Ridge Forrester’ revealed that he was getting older and traveling so often is harder on him.

Thorsten travels cost-to-coast every week. He flies to L.A. on Monday. Thorsten works Tuesday through Thursday, returning to New York on Friday. He spends weekends with his family, only to leaving Monday morning back to L.A. He said, “It’s exhausting; I am getting too old to recover from traveling like I used to.”

Thorsten said that he genuinely loved his job. He touted, “Bradley Bell is a great boss. It’s a fun job, and the material for Ridge is edgy; it’s just the traveling is so difficult.” Thorsten explained that the time difference was something he never gets used too. “I wake up at 3:30 am every morning in L.A. I am used to Eastern Time. I look like crap because I don’t get the sleep I need from bouncing back and forth from one-time zone to another, “Kaye said. Thorsten realized he may be going overboard on complaining about traveling and said, “I should be thankful for my success and shut up.”

Thorsten said his kids are constantly on his mind, and makes it difficult for him to sleep – at times. He feels he is missing out on their lives by traveling so much. Thorsten’s longtime girlfriend and “AMC” alumni, Susan Haskell, and he share two daughters, Marlowe, 8 and McKenna 12.

Thorsten kept his children sheltered from L.A. for a good reason. He feels life in California moves to fast. He said, “I see kindergarteners with cell phones. They are so connected electronically and don’t talk to their parents. I know that is not how I want to raise my daughters.”

Linsey Godfrey told Soap Opera Digest that following her accident, Thorsten stepped up and was there for her in an amazing way. He said he felt bad for her. She was alone and needed someone to help her. Thorsten commented about Linsey: “She’s an amazing actress. We have a nice connection in the show. How long Ridge and Caroline will last, who knows? It could be three minutes or three years. Plus it didn’t cost me anything to drop in and say hello to her, and brighten up her day.”

Thorsten said he isn’t convinced that Ridge and Caroline will get their happily ever after. He noted that in daytime TV, life moves so fast – much quicker than prime-time. He is excited to show his fans what he is made of with the Ridge and Caroline storyline, and his quest to give her the baby she desires. The real question is will he turn to his son, Thomas (Pierson Fode) to make her happy? Thorsten Kaye says that you will have to continue to watch to see how it all unfolds. Come back to CDL for more “Bold and the Beautiful” spoilers and news!