The Bold and the Beautiful (B&B) Spoilers: Zende and Nicole Battle – Thomas Learns of Caroline’s Baby – Liam Lusts for Ivy 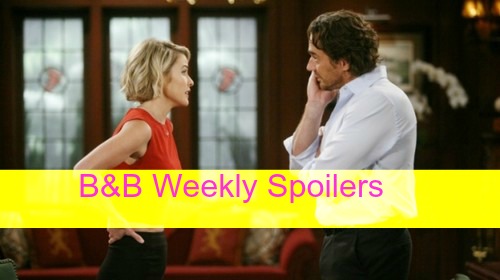 “The Bold and the Beautiful” spoilers tease that several relationships could be on the rocks this coming week, October 12 – October 16. First, we’ve got all the baby drama with Ridge (Thorsten Kaye), Caroline (Linsey Godfrey) and Thomas (Pierson Fode).

Ever since Ridge found out about Thomas and Caroline’s hookup, he’s been as cold as ice to his son. Unfortunately, the tension won’t be thawing anytime soon. Ridge wants rid of Thomas and he doesn’t plan on backing down.

Caroline will stand by Ridge’s decision, but she’ll wish it didn’t have to be this way. Deep down, Caroline feels that Thomas needs to be aware of his child. Whether Thomas took advantage of Caroline or not is still up for debate, but he deserves to know if he’s going to be a father. Will Caroline let Thomas know or will he find out through a different channel?

Keeping such a huge secret could prove problematic for Caroline. All of this stress can’t be good for Caroline or her baby. Caroline should either come clean or try to make peace with the situation. Otherwise, we could have a miscarriage on our hands. 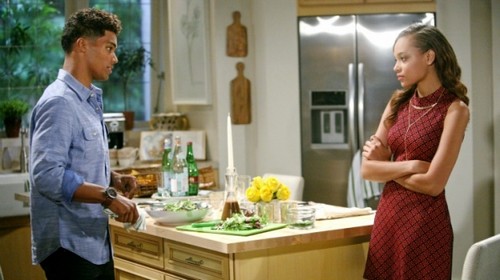 Meanwhile, a possible pregnancy will cause trouble for another couple. Rick (Jacob Young) and Maya (Karla Mosley) recently asked Nicole (Reign Edwards) if she’d be their surrogate, but she won’t be quick to give an answer. A decision like this takes time.

“The Bold and the Beautiful” spoilers say Nicole will spill the details to Zende (Rome Flynn) and he’ll be surprised that she’s considering it. What does this mean for them as a couple? It could completely change the game.

Nicole will probably contend that she’d simply be carrying a child for her sister and they could still move forward with their relationship. Besides, Nicole will just be handing the Forrester baby over in nine months. However, this is all happening pretty fast and it will undoubtedly make things awkward for a pairing that’s barely gotten started. B&B rumors hint that Zende won’t be so sure he has a future with Nicole. 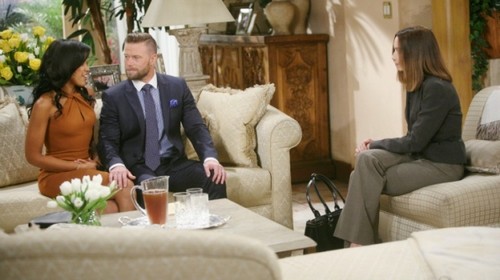 At the office, Ivy’s (Ashleigh Brewer) new position will put her back in Liam’s (Scott Clifton) orbit. Wyatt (Darin Brooks) will find himself getting a little jealous when Ivy begins interacting with her ex more. In fact, Wyatt will fear that Ivy could be falling for Liam again. That ship seems to have sailed, but what if it comes back into the harbor?

Once Ivy starts parading around in lingerie, Liam could see what he’s been missing. Steffy (Jacqueline MacInnes Wood) won’t be too please about this development, looks like her nasty plan might backfire! Ivy will likely insist that she’s committed to Wyatt now, but anything can happen on the CBS soap. The Spencer brothers just aren’t satisfied without a love triangle in play. Stick with “The Bold and the Beautiful” for updates on Ivy’s romantic intentions.

So B&B fans, what do you think about the news that there could be breakups and shakeups coming over the next few weeks? Which couples will survive and which ones will be torn apart? Voice your opinion in the comments below and don’t forget to check CDL often for the latest “Bold and the Beautiful” spoilers, rumors, updates and news.