The Bold and the Beautiful (B&B) Spoilers: Caroline Throws Thomas Under The Bus for Ridge – Ivy New Lingerie Model? 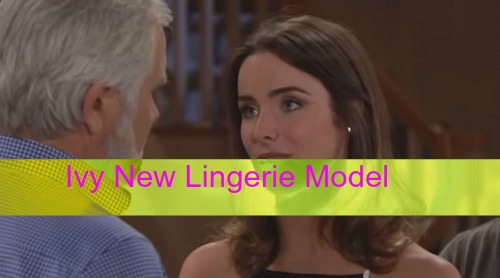 “The Bold and the Beautiful” spoilers for Thursday, October 8, reveal that Ridge’s (Thorsten Kaye) wrath will continue. Ridge made it perfectly clear that Thomas (Pierson Fode) couldn’t fix what happened with a simple apology. An “I’m sorry” just isn’t going to cut it. Ridge is done with Thomas’ immaturity and impulsive decisions. In fact, Ridge just ordered Thomas to get out of town. B&B spoilers say Thomas will try to change his mind, but Ridge will maintain that there will be consequences for his son’s actions.

Caroline (Linsey Godfrey) was hesitant to keep Thomas’ baby a secret from him at first, but it looks like she’s starting to come around. When Thomas speaks with Caroline in private, she’ll back up Ridge’s plan to send Thomas to Paris. “The Bold and the Beautiful” spoilers tease that Caroline will tell Thomas he just needs to do what Ridge says. Ridge doesn’t want Thomas in Los Angeles and that means he needs to leave immediately.

Thomas will undoubtedly be a little confused by everything that’s going down. Sure, Thomas said a few things he regrets and ended up throwing a punch. However, Thomas will sense that this about something more. Once Thomas sees how upset Caroline is, he’ll ask if she told Ridge about the night they hooked up.

Caroline probably won’t offer too many details on the conversation, but she’ll insist that she’s on Ridge’s side. Caroline doesn’t want to lose Ridge and she might be willing to do just about anything to keep him. That includes throwing Thomas under the bus. Of course, Thomas practically hurled himself under there when he made his move with Caroline. This is a big mess and it’s not going to get sorted out anytime soon.

Meanwhile, Steffy (Jacqueline MacInnes Wood) will put Ivy (Ashleigh Brewer) to the test. Ivy said she’d do anything Steffy asked of her if she’d give her another chance. Ivy added that she truly wanted to make Forrester Creations a success. Steffy will ask Ivy to show her loyalty by offering her a surprising position within the company.

“The Bold and the Beautiful” rumors indicate that Steffy may want Ivy to be a lingerie model. Ivy will have some reservations about the new gig, but she’s smart enough to know she can’t turn it down. This is Ivy’s opportunity to get back to work and she’s not going to blow it. Stick with the CBS soap for updates on Ivy’s future at Forrester.

So B&B fans, what do you think about the news that Thomas will realize Caroline spilled the beans about their hookup? Will Caroline admit she told Ridge the truth? What about Ivy’s uncomfortable new job? Will Ivy just have to grin and bear it? Let us know what you think in the comments below and don’t forget to check CDL often for the latest “Bold and the Beautiful” spoilers, rumors, updates and news.