The Bold and the Beautiful (B&B) Spoilers: Ridge Vows to Keep Thomas Away From Baby – Eric Settles Steffy and Ivy’s Dispute

BY Heather Hughes on October 7, 2015 | Comments: one comment
Related : Soap Opera, Spoiler, Television, The Bold and the Beautiful 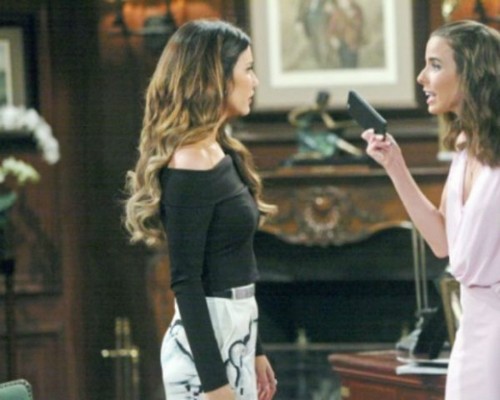 “The Bold and the Beautiful” spoilers for Wednesday, October 7, tease that Liam (Scott Clifton) will argue with Wyatt (Darin Brooks) about Ivy’s (Ashleigh Brewer) recent move. In an effort to force Steffy (Jacqueline MacInnes Wood) to back down, Ivy is using Eric (John McCook) as her secret weapon. Liam will insist that Eric is never going to side with Ivy after he hears the whole story.

Wyatt will likely acknowledge that Ivy’s actions were wrong, but Steffy isn’t blameless in all of this either. It was just as wrong for Steffy to fire Ivy after she tried to make things right. Nevertheless, Liam will maintain that Eric will see this situation from Steffy’s point of view.

Steffy will be livid once she learns Ivy is trying to go over her head to get her job back. When Eric presses for answers on their conflict, Steffy will admit that she fired Ivy because of her blackmail scheme. Ivy will try to explain that she was grieving over Aly’s (Ashlyn Pearce) death, but she now realizes it wasn’t the optimum coping method.

As Ivy and Steffy begin to bicker again, Eric will declare that enough is enough. Eric will hope that they can find an arrangement that appeases everyone. A little give and take could go a long way toward finishing this feud. Good luck with that!

Other “Bold and the Beautiful” spoilers say Ridge (Thorsten Kaye) will believe everything will be OK if they can just stick to the plan. At Ridge’s suggestion, Caroline (Linsey Godfrey) agreed to keep Thomas’ (Pierson Fode) baby a secret from him. However, it’s clear that Caroline still has some reservations about it. Caroline feels Thomas deserves to know that she’s carrying his child. Ridge, on the other hand, feels that Thomas doesn’t deserve anything at all.

Thomas typically takes whatever he wants in life, but Ridge won’t let him take this. Ridge intends on raising this baby as his own and he won’t let Thomas stand in his way. Unfortunately, Ridge’s plot will probably get derailed. Soap secrets almost always blow up eventually. B&B rumors hint that Thomas will learn the truth and it could lead to big trouble. Stay tuned to “The Bold and the Beautiful” for updates on all the “baby daddy” drama.

So B&B fans, what do you think about the news that Liam and Wyatt will be at odds? Will the hostility between these brothers ever end? Can Eric help Steffy see the light? Will Ridge and Caroline be able to pull off their scheme? Let us know what you think in the comments below and don’t forget to check CDL often for the latest “Bold and the Beautiful” spoilers, rumors, updates and news.