BY Stormy Elizabeth on December 2, 2015 | Comments: one comment
Related : Soap Opera, Spoiler, Television, The Bold and the Beautiful 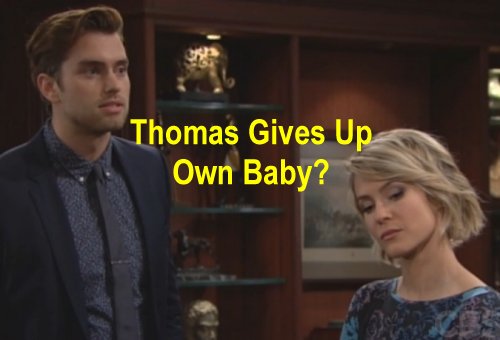 “The Bold and the Beautiful” (B&B) spoilers tease that the baby secret Ridge Forrester (Thorsten Kaye) and Caroline Spencer (Linsey Godfrey) are keeping from Thomas Forrester (Pierson Fode) will not stay secret for long.

Thomas has overheard his dad and new young step-mom talking and they almost blabbed the secret themselves. Plus, the loose talk around Forrester Creations about Ridge’s vasectomy will persist so someone will figure it out soon.

If it’s Thomas who figures it out, will he want to claim his parental rights? Or can Ridge bribe Thomas somehow to allow him to raise his grandson as his son and keep Thomas out of the picture altogether? What would it take to buy off Thomas?

Clearly Thomas is in no frame of mind to settle down and be a family man right now, but that doesn’t mean that he doesn’t want to be a father to the child he helped create. But Ivy Forrester (Ashleigh Brewer) could be a factor.

“Bold and the Beautiful” spoilers hint that Thomas may soon talk Ivy out of Wyatt Spencer’s (Darin Brooks) arms and into his. If this happens, Thomas may not want to run the risk that this baby could change her mind.

Thomas seems close to convincing Ivy to take a chance on romance with him – and explaining to your new girlfriend that you impregnated your step-mother is not a conversation you want to have early on in a relationship.

Of course, Ivy knows Thomas is something of a man-slut, but the pregnancy news would be hard to take. Thomas may be open to working a deal with his dad Ridge to keep the paternity secret.
After all, lying about baby daddies is part of Forrester history since Thomas began his own life with Ridge thinking his brother Thorne Forrester was Thomas’ father.

But what could Ridge offer to keep Thomas quiet? Perhaps a promise not to try and exile him to Paris again? It’s good, but seems like small potatoes… How about a promotion at work that would put Thomas in a greater power position?

Thomas would love to lord over Wyatt that he’s the boss. Remember Thomas was once the largest shareholder and President of Forrester Creations, but family drama cheated him of both of those prestige positions.

If Thomas is clever and ambitious (and we know he’s both), he should demand to be restored. Thomas likely sees the 5% of Forrester Creations he now owns as paltry and could ask Ridge for a chunk of his stock in exchange for keeping mum about being Caroline’s baby daddy.

Thomas could also ask Ridge to push Steffy aside to make him President. What do you think B&B fans? Would Thomas “sell” the rights to the baby Caroline is carrying to gain more power at Forrester Creations?

And how much would Ridge be willing to sacrifice to keep the baby paternity secret? Share your comments below and stay tuned to CDL for more “Bold and the Beautiful” spoilers, gossip and more.