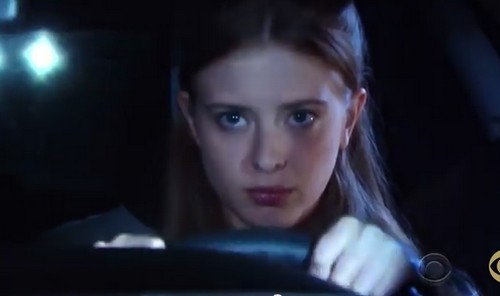 “The Bold and the Beautiful” spoilers tease that we haven’t seen the last of Aly (Ashlyn Pearce). Aly won’t be returning from the dead, but fans of the character will be able to catch a glimpse of her in a dream sequence. The scene will air in the August 13 episode of B&B. It sounds like Steffy (Jacqueline MacInnes Wood) will continue to be tormented by that horrific accident on the highway. As if reliving that night in her head wasn’t bad enough, Steffy will soon have to watch it play out before her very eyes.

On August 14, Ivy (Ashleigh Brewer) will finally show Steffy the dirt she has on her. “The Bold and the Beautiful” spoilers reveal that Ivy will play the video she shot just before Aly’s death. Steffy’s reaction will probably be pretty similar to the response of most viewers. The question that immediately comes to mind is: why does this video exist in the first place? It’s still baffling why Ivy chose to whip out her phone and shoot footage of Steffy killing her best friend. Ivy might as well have popped some popcorn and munched during the mayhem.

You’d think Ivy would’ve tried to stop Steffy from making a tragic mistake, but what’s done is done. Now Ivy will have to decide what she’s going to do with the proof. Unfortunately, another poor decision is in Ivy’s future. It’s not surprising that blackmail is the route B&B is going. After all, what good is having a piece of evidence on a soap if it isn’t used against someone?

“The Bold and the Beautiful” spoilers say Ivy will try to use the video as leverage to get a promotion at Forrester Creations. It seems Ivy is joining the current modeling bandwagon at FC. Nicole (Reign Edwards) and Steffy already hopped on board and it’s Ivy’s turn to hitch a ride. Thomas (Pierson Fode) will also be clued in on all of this and he’ll likely have no choice but to go along with the idea.

To be fair, Ivy will be somewhat forced into her blackmail scheme. Steffy will start dropping some hints to Liam (Scott Clifton) about firing Ivy. Is it wrong for Ivy to use the video to keep herself employed? Yes, but perhaps Ivy feels like she’s run out of options. Besides, Steffy just stole Ivy’s poor excuse for a boyfriend and she isn’t telling the whole truth about what happened to Aly. Maybe Steffy is just getting what she deserves. What goes around comes around. Still, rumors suggest that Ivy’s plan won’t end well. Stick with the CBS soap to see if Ivy’s devious plot will backfire.

So B&B fans, what do you think about the news that Aly will pop up in a dream sequence? Are you excited to see Aly again, even if it’s just in a nightmare? What about Ivy’s blackmail scheme? When Steffy and Thomas get updates on what Ivy is trying to do, will they give into her demands? Let us know what you think in the comments below and don’t forget to check CDL tomorrow for the latest “Bold and the Beautiful” spoilers, rumors, updates and news.