‘The Bold and the Beautiful’ Spoilers: Thorne Blames Steffy for Aly’s Death – Evidence Sends Steffy To Jail or Exonerates Her 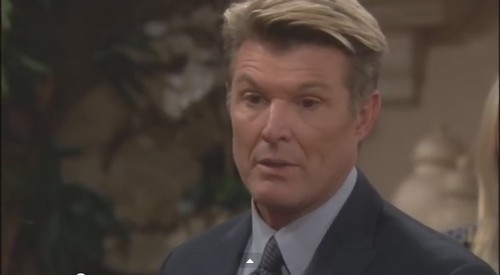 “The Bold and the Beautiful” spoilers tease that Steffy (Jacqueline MacInnes Wood) will fear her secret could be soon be discovered. Steffy took a swing at Aly (Ashlyn Pearce) and it led to a deadly fall. Ivy (Ashleigh Brewer) and Steffy will get into a heated confrontation about what Steffy is choosing to omit from her tale. As long as Ivy has the video from the scene, Steffy runs the risk of getting caught.

Thorne’s (Winsor Harmon) heartbreak and outrage will likely make matters worse. Thorne was devastated when he learned he’d lost his little girl. B&B rumors hint that Thorne will have a hard time accepting that Aly was capable of attacking Steffy. Thorne may try to turn this around and make Steffy look like the attacker. When the tire iron turns up in the bushes, it’s going to look awfully inconsistent with Steffy’s story. Between the Ivy’s footage and the tossed-out weapon, Steffy could find herself sitting in jail.

Once the evidence is brought to light, Steffy will undoubtedly have to come clean about the whole ordeal. However, by then it could be too late. Steffy’s lies could lead to a few charges by the end of this. Steffy probably won’t be convicted of anything, but she could get a good scare before everything is dropped.

Of course, Thorne may eventually accept just how out of control Aly was. Thorne wasn’t around to see the violent outbursts that preceded Aly’s breakdown, but there’s plenty of proof that she wasn’t in her right mind. The hate boards, the nail in Steffy’s tire and the skid marks all back up Steffy’s claims. Plus, Aly’s fingerprints would obviously be on the tire iron, which could ultimately put Steffy in the clear.

Nevertheless, Steffy will have to deal with the harsh aftermath of the accident. “The Bold and the Beautiful” spoilers reveal that Aly’s death will lead to some major strife for the Forrester clan. Will they be able to overcome this crushing loss? Time will tell, but the Forresters usually find a way to move forward. Stay tuned to “The Bold and the Beautiful” to see if Aly’s death will lead to some big updates for the entire family.

So B&B fans, what do you think about the news that Ivy will argue with Steffy about her role in Aly’s death? Could Steffy face charges or will the police rule that she indeed acted in self-defense? Will Thorne ever forgive Steffy for taking his precious daughter away from him? Let us know what you think in the comments below and don’t forget to check CDL tomorrow for the latest “Bold and the Beautiful” spoilers, rumors, updates and news.