BY Amanda Austin on May 18, 2015 | Comments: 9 comments
Related : Soap Opera, Spoiler, Television, The Bold and the Beautiful 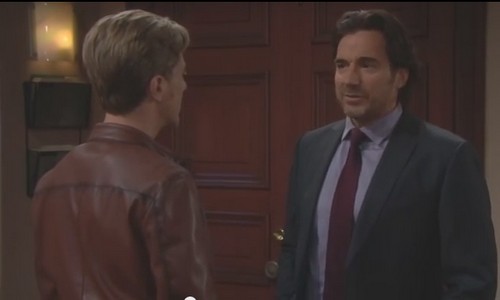 “Bold and the Beautiful” spoilers tease that the week of May 11 – 18 will be another eventful one, and rumor has it fans of the CBS soap will not want to miss a single episode. Rick’s reign of terror could finally be over, and the CEO learns that a clause in his contract could cost him the company. All hell will be breaking loose at Forrester Creations – and Bill Spencer (Don Diamont) can’t help but gloat over his success. But, while he and Justin are celebrating, “Bold and the Beautiful” spoilers tease that Katie (Heather Tom) is not happy with her husband – and Bill’s victory could cost him his marriage.

“Bold and the Beautiful” spoilers tease that while Maya’s (Karla Mosley) transgender secret is unravelling during the week of May 18, and the fallout is huge – Ridge Forrester meets with her old pal Nick, and he sheds some light on the issue and helps Ridge to understand Maya’s identity and choice to live life as a woman. When Ridge isn’t getting schooled on the transgender lifestyle, he gets a shocking surprise. “Bold and the Beautiful” spoilers and coming and going reveal that Ridge’s girlfriend Caroline is back from New York City – and she is in a wheel chair! Caroline explains to Ridge (Thorsten Kaye) that the reason it took her so long to return home was because she was involved in a car accident, similar to what happened to the character’s portrayer Linsey Godfrey.

In other “Bold and the Beautiful” news, spoilers tease that during the week of May 18 B&B fans can also expect to see some tense scenes between Wyatt (Darin Brooks) and Nicole (Reign Edwards), she is not happy that Wyatt betrayed her. While Wyatt’s relationship with Nicole seems to be over, his brother Liam’s (Scott Clifton) relationship with Ivy Forrester (Ashleigh Brewer) seems to really be heating up, and according to spoilers during the upcoming week the couple will be discussing their future together.

So Bold and the Beautiful fans, do you think that after Ridge talks to Nick he may sympathize for Maya? Is this the end of Wyatt and Nicole? What about Liam and Ivy, what plans are they making for the future? Are you as excited as we are to have Caroline back? Let us know what you think in the comments below and don’t forget to check CDL tomorrow for more “Bold and the Beautiful” spoilers and news.

The Bold and the Beautiful video preview spoilers for Monday May 18, 2015