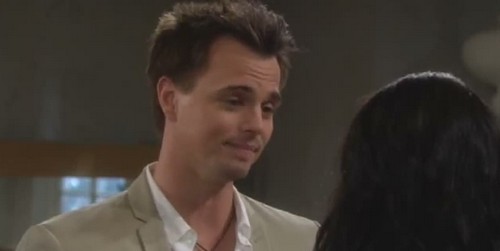 “The Bold and the Beautiful” spoilers for Friday, April 17, tease that Carter (Lawrence Saint-Victor) will question Deacon (Sean Kanan) about his choice to marry Quinn (Rena Sofer). Carter was recently blindsided by the news that Maya (Karla Mosley) used to be a man and it’s obviously weighing heavily on his mind. As Deacon prepares for his wedding ceremony, Carter will hint that Maya wasn’t who he thought she was. Carter will ask if Deacon might be wondering the same thing about his bride-to-be.

Deacon may think he knows the real Quinn, but there’s a good chance he hasn’t had time to fully grasp what she’s capable of. Quinn might not have a secret as shocking as Maya, but we all know Quinn has some huge faults. Nevertheless, Deacon seems to accept Quinn and all her crazy imperfections. Will Carter’s questions create any doubt for Deacon? It’s tough to say, but Deacon will have a lot to consider before he actually says “I do.” B&B rumors say this wedding won’t go off without a hitch. Stay tuned to “The Bold and the Beautiful” to see if Deacon and Quinn’s marriage will really happen.

Meanwhile, it looks like Wyatt (Darin Brooks) will finally give Quinn his blessing. “The Bold and the Beautiful” viewers know that Wyatt has had reservations about Quinn’s choice to be with Deacon. Wyatt doesn’t trust Deacon and he probably never will. Still, it’s clear that Wyatt wants his mother to be happy. Wyatt will tell Quinn that there’s someone out there for everybody and if Deacon is that someone for Quinn, he can accept it. Quinn will be thrilled to have Wyatt on board with her relationship, but there are plenty of people who think her marriage is a terrible idea. Brooke (Katherine Kelly Lang) and Hope (Kim Matula) will undoubtedly try their best to stop the ceremony. In the end, it’ll be up to Deacon to decide whether he truly wants to make this risky decision.

So B&B fans, what do you think about the news that Carter will ask Deacon some tough questions about Quinn? Will Deacon get cold feet or remain devoted to building a life with his bride? Will Quinn be even more certain of her marriage if Wyatt approves? What about Brooke dragging Hope into this? When Hope gets updates on the wedding, will she be able to convince Deacon to back out? Let us know what you think in the comments below and don’t forget to check CDL tomorrow for the latest “Bold and the Beautiful” spoilers, rumors, updates and news.