‘The Bold and the Beautiful’ Spoilers: Nicole and Zende Want Internships – Ivy Won’t Fight For Liam, No Man Worth Her Dignity 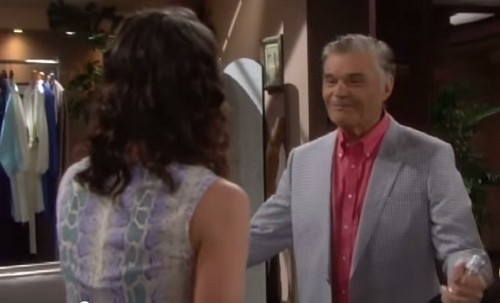 “The Bold and the Beautiful” spoilers for Monday, June 29, tease that John Forrester (Fred Willard) will breeze back into town and have a chat with Ivy (Ashleigh Brewer). Ivy will probably give her father updates on everything she’s been through with immigration services. It’s been a wild ride for both Ivy and Liam (Scott Clifton). However, now that Ivy is certain she can remain in the country, Liam has the chance to get out of their marriage if he wants to.

B&B spoilers say Liam will tell Steffy (Jacqueline MacInnes Wood) this whole ordeal made him realize just how much she means to him. Steffy seemed happy when she learned that Liam was off the hook, but she should really approach this situation with caution. Pardon the Katy Perry lyric, but Liam changes his mind like a girl changes clothes. The rumors hint that Liam could find himself turning back to Ivy soon enough.

Nevertheless, Liam’s going to have to make a decision at some point. Steffy finally realized that she wasn’t willing to share Liam and it’s Ivy’s turn to have a moment of clarity. “The Bold and the Beautiful” spoilers reveal that Ivy will say she’s not going to fight with Steffy over Liam. Ivy will add that no man is worth her dignity. Will Liam feel guilty and stick with his marriage? Stay tuned to the CBS soap to see what Liam’s next move will be.

Meanwhile, Nicole (Reign Edwards) will inform Ridge (Thorsten Kaye) that she wants to be an intern at Forrester Creations. When Nicole first came on the scene, she planned on riding Maya’s (Karla Mosley) gravy train all the way to the top. Of course, things have changed drastically since then. Now Nicole just wants to pay her dues and work her way up in the company. It sounds like Ridge will give Nicole a chance to prove herself.

You should also watch for Rome Flynn to debut as Zende Forrester Dominguez in Monday’s episode. Nicole and Zende will both get internships at FC, which means they’ll be getting to know each other over the next few weeks. Stick with “The Bold and the Beautiful” to see what’s in store for Zende and Nicole.

So B&B fans, what do you think about the news that John will be stopping by Forrester Creations? Is Ivy done fighting for Liam? Will Liam move on with Steffy or change his mind once again? Will Nicole do well as an intern? Will Zende and Nicole hit it off? Let us know what you think in the comments below and don’t forget to check CDL tomorrow for the latest “Bold and the Beautiful” spoilers, rumors, updates and news.

The Bold and the Beautiful video sneak peek preview for Monday, June 29 below: