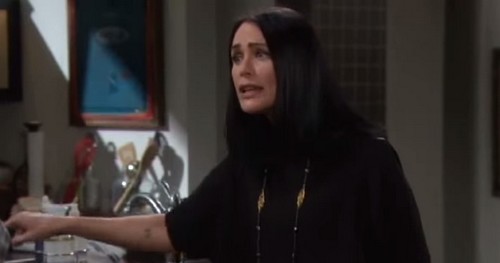 “The Bold and the Beautiful” spoilers for Wednesday, March 4, hint that Steffy (Jacqueline MacInnes Wood) will be giving up on Liam (Scott Clifton) for now. The rumors say that Jacqueline MacInnes Wood may be exiting the role of Steffy soon, though Jacqueline may return again in the future. Without Steffy in the picture, Liam will be free to forge ahead with Ivy, but he’ll lose a valuable part of his plot to take down Rick (Jacob Young). The alliance needed Steffy’s stocks for a hostile takeover so it seems they’ll need to come up with a new plan if they hope to succeed in ending Rick’s reign.

“The Bold and the Beautful” spoilers tease that Steffy will discuss Liam’s strategy with Ridge (Thorsten Kaye). Steffy will also tell Ridge that she’s not going to torture herself by watching Liam and Ivy fall deeper in love. Stay tuned to B&B to find out if that means Steffy will be leaving town. Note that Kim Matula’s return might be related to Jacqueline MacInnes Wood’s storyline – the two actors were known to be very competitive – up to point of refusing to work with each other.

Other “Bold and the Beautiful” spoilers for Wednesday, March 4, indicate that Wyatt (Darin Brooks) and Quinn (Rena Sofer) will clash over her recent visit to see Brooke. Quinn will claim that Brooke (Katherine Kelly Lang) is a man predator who just wanted to get Deacon in her bed, but Wyatt won’t believe that Deacon (Sean Kanan) was just a defenseless pawn in Brooke’s scheme. Wyatt has already made his feelings known about Quinn’s poor taste in men. The fact that Deacon still seems close to Brooke only confirms Wyatt’s instincts.

Meanwhile, Deacon will tell Brooke that he’s firmly committed to Quinn, but she’ll always have a piece of his heart. However, Brooke wants to make sure Deacon knows exactly what he’ll be up against with Quinn. The latest “Bold and the Beautiful” spoilers video shows Brooke saying “You really need to understand the woman you’re getting involved with before you’re in too deep and you can’t get out.” It appears that Brooke is about to bring up something from Quinn’s past to scare Deacon off. You can bet that whatever Brooke says won’t sit well with Quinn when she finds out. Check out the Wednesday, March 4 episode to see what Brooke will reveal.

So B&B fans, what do you think about the news that Steffy may be giving up on Liam? Is it for the best or should Steffy keep fighting? What about Wyatt and Quinn’s discussion? Is Quinn right about Brooke preying on her man? What about Brooke’s scare tactic with Deacon? What information will Brooke bring to light? Let us know what you think in the comments below and don’t forget to CDL tomorrow for the latest “Bold and the Beautiful” spoilers, rumors and news.