BY Cheri Magistro on May 12, 2015 | Comments: one comment
Related : Soap Opera, Spoiler, Television, The Bold and the Beautiful 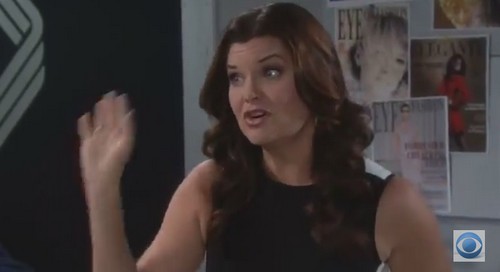 The Bold and the Beautiful spoilers are hearing some new disheartening rumors that affect a recently wed couple, in fact this marks their second time wedding, hopefully, not their second time divorce. Recently, Bill Spencer [Don Diamont] and Katie Logan [Heather Tom] tied the knot once again hoping for a second chance at a future together with their son Will by their side. Bill promised he has changed from their last marriage and will definitely be around for the long haul this time. Katie, hearing everything she ever wanted Bill to say and of course with her big sister Brooke [Katherine Kelly Lang] passing up on a marriage proposal from Bill herself, lead the way to these two saying their B&B ‘I do’s’.

But less than a few months into their second chance marriage, signs of disenchantment are start to brew inside Katie. The latest Bold and the Beautiful news is dishing about Katie’s hesitation and over-all concern about the Spencer Publications reveal of Maya Avant’s [Karla Mosley] transgender secret and the hostile takeover plans slated for Forrester Creations by her husband Bill and his two sons Liam [Scott Clifton] and Wyatt [Darin Brooks]. Katie of course wants to support her husband and stepsons, but she feels they are definitely crossing a line, a family line that is which will hurt Rick, his company as well has his girlfriend.

Since they want Katie’s nephew Rick Forrester unseated as CEO of FC, Katie doesn’t want them to ruin her family, including her sister Brooke. In more breaking Bold and the Beautiful teasers, we are learning that Katie will need to make a tough decision, which side to take: to support her new family over her old family. We are hearing at the very last moment, right before Bill and company publish and begin their takeover endeavor in earnest, Katie runs to Rick and Brooke and gives them a heads up to what all is suppose to go down with Forrester Creations, including Bill’s plan to publish that Rick’s girlfriend Maya is a transgender!

Heads will certainly roll once the alert is sounded and Rick quickly builds his own defence to crush Dollar Bill before he knows what hit him. Unfortunately, this will lead Bill and Katie’s marriage to a very rough patch. Will Bill be able to really take his wedding vows seriously this go around? “For better or for worse” the worse part, can Katie’s betrayal for be forgiven? It will certainly be interesting to watch Bill, for once, be on the receiving end of an tricky attack. Bill can never fail with us here. He always makes for good TV watching! Stay tuned to CDL for more The Young and the Restless spoilers, updates and news!

Watch The Bold and the Beautiful Video preview spoilers for May 12, 2015