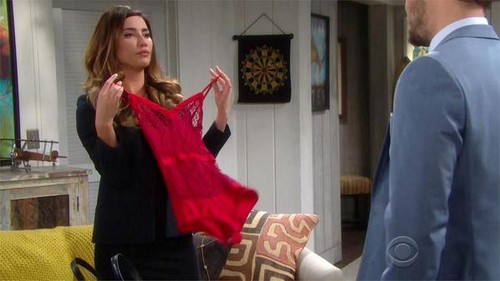 The Bold and The Beautiful spoilers indicate that Ivy Forrester (Ashleigh Brewer) will be the recipient of some very bad news that will have friends and family scrambling to help her. B&B fans know that Ivy is here on a work visa from Australia. According to The Bold and the Beautiful spoilers the time is almost up on that visa and Ivy may soon have to leave the country unless someone can come up with a way to keep her in the United States.

According to the Bold and the Beautiful spoilers Liam (Scott Clifton) will be the one to step up to Ivy’s rescue. He has always liked to be the Knight in shining armor for the woman in his life and once again he can do this for Ivy. The first time Liam got to play the conquering hero was when he teamed up with Ridge to take over Forrester Creations and oust Rick (Jacob Young) from power after he began to mistreat Ivy and Caroline (Linsey Godfrey). He also saved Ivy when Quin (Rena Soffer) pushed her into the sine in Paris.

Now, according to The Bold and The Beautiful spoilers Liam will make the ultimate commitment and ask Ivy to marry him so that she can stay in the States and they can stay together. This is a chivalrous move and very Liam-like. If Ivy decides to accept it will alleviate two problems. She solves the issue of staying in the United States, and it gets Liam away from Steffy (Jacqueline Maccinnes Wood). Bold and the Beautiful fans have seen the escalating animosity between the two cousins recently over Steffy’s interference in Ivy’s relationship with Liam.

The Bold and the Beautiful spoilers say that Steffy will not take kindly to the news of Liam’s marriage proposal to Ivy and she will confront Ivy about the marriage letting her know that Liam is only marrying her so that she can stay in the country. The two women will have another confrontation over Liam and Ivy will let Steffy know in no uncertain terms to stay away from Liam. Steffy has not respected the relationship so far. Going so far as to use her shares in Forrester to try and get Liam to leave Ivy and be with her so why should Ivy expect Steffy to stop pursuing Liam now? Fans know Steffy is not a woman to stop until she gets what she wants. We can expect good old Steffy to pull a few moves in order to stop a Liam-Ivy wedding!

So fans what do you think? Will Ivy accept Liam’s proposal? How will Steffy react to the news of Liam’s proposal? Are Ivy and Liam ready to take such a huge step and will Steffy be able to respect the new level of commitment the couple has made? Stay tuned the B&B on CBS and come back to CDL for more Bold and the Beautiful News, Spoilers, and Rumors. Please leave your thoughts and comments in the section below.

Watch The Bold and the Beautiful preview video for June 9, 2015