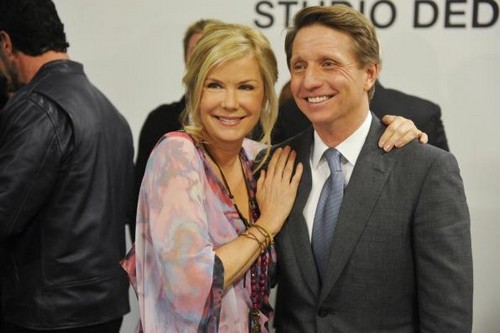 “Bold and the Beautiful” spoilers tease that the month of February 2015 will be an exciting one, packed full of drama, as the CBS soap gears up for February Sweeps. The four remaining daytime dramas pull out all of the stops for February Sweeps, and “Bold and the Beautiful” is no exception. Rumors are currently floating around the internet teasing some exciting twists and turns for the CBS soap, and if at least half of these rumors turn out to be true – B&B fans are in for a huge treat. Here are some of our favorite “Bold and the Beautiful” rumors for the month of February, please remember right now these are just rumors and may or may not turn out to be true.

A February Wedding: No soap opera does weddings like “Bold and the Beautiful,” we can’t even count on two hands all of the weddings and almost weddings that occurred during 2014. Rumor has it that the soap’s first wedding of the year will occur during February Sweeps – and Bill (Don DIamont) and Katie Spencer are headed down the aisle to say “I Do” … again.

Brooke’s Love Life: Since Brooke Logan returned from Milan, for the first time in her life she hasn’t had men falling at her feet. Bill has moved on with Katie (Heather Tom), and her old flame Ridge (Thorsten Kaye) has moved on with Caroline, her soon to be ex daughter-in-law. Rumor has it that Brooke decides to take a trip down memory lane and finds herself wondering “what if” about her baby-daddy Deacon Sharpe (Sean Kanan) – and sets out to steal him from Crazy Quinn!

A Hope Logan Recast: TPTB at “Bold and the Beautiful” can’t seem to make up their mind about a Hope Logan recast. When news first broke that Kim Matula was quitting, it was announced that they would not be recasting the role. Then Bradley Bell said in an interview that they would be searching for a new Hope Logan. Now, “Bold and the Beautiful” reps are telling Soaps In Depth that there is “no truth to the rumors that they are recasting Hope Logan.” According to rumors floating around the internet, the reason B&B is being so secretive about a Hope Logan recast is because they have already found her and want it to be a surprise during February Sweeps.

Steffy Seduces Liam: When “Bold and the Beautiful” spoilers confirmed that Jacqueline MacInnes Wood was returning to the CBS soap as Steffy Forrester, we all knew it was only a matter of time before she wound up back in bed with her old flame Liam (Scott Clifton). Rumor has it that while Steffy is helping Liam take over Forrester, she seduces him; naturally, Ivy (Ashleigh Brewer) will walk in on their scandalous reunion.

Maya Pregnant: It’s safe to say that Rick Forrester has gone off the deep end – and when he pulls himself out of the hole he has dug for himself, rumor has it that he cuts Maya (Karla Mosley) loose and admits that their entire relationship was just a sham to get revenge on Caroline. However, Maya won’t be so quick to let Rick move on and according to rumors floating around the internet – she is pregnant with the next Forrester heir.

So B&B fans, are you as excited as we are for February Sweeps? Do you think that Bill and Katie’s wedding will go off without a hitch? Will he get her a real ring, instead of a string? If there is a Hope Logan recast, who do you think it should be? Will Liam cheat on Ivy with Steffy? Let us know what you think in the comments below and don’t forget to check CDL tomorrow for more “Bold and the Beautiful” spoilers and news.