‘The Bold and the Beautiful’ Spoilers: Liam Moves To Replace Rick – Ridge and Caroline Threaten Rick With Cops? 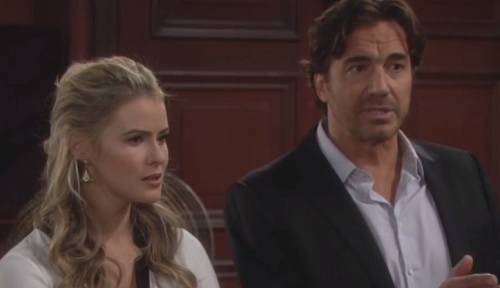 “Bold and the Beautiful” spoilers tease that the episode of the CBS soap airing on Thursday, January 29 will be another exciting one full of must-see drama. Brooke Logan (Katherine Kelly Lang) is having a tough time adjusting to all of the major changes that occurred while she was in Milan, like her son Rick (Jacob Young) shacking up with Maya after his wife kiss Brooke’s baby-daddy and ex-lover Ridge Forrester. And, according to B&B spoilers, Brooke is not okay with the way things transpired while she was away.

The “Bold and the Beautiful” spoiler video for Thursday’s episode of the CBS soap shows Brooke Logan ranting to someone about Ridge and Caroline’s affair. In the sneak peek B&B video, Brooke proclaims, “If Caroline (Linsey Godfrey) had kissed anyone else, that moment would have come and gone, and they would all be over it by now.” If anyone knows anything about pitting two brothers against each other, it is Brooke Logan – so she may be on to something.

In other “Bold and the Beautiful” news, it looks like Rick’s reign of terror at Forrester Creations is finally coming to an end – the real question is who will dethrone him first, Ridge or Liam. The “Bold and the Beautiful” spoiler video that for January 29 episode of the CBS soap shows Ivy Forrester whining to someone about Rick’s leadership qualities, or lack of. Ivy (Ashleigh Brewer) goes on, “It’s like he is actively seeking out to sabotage everything. But, he is the boss so we all suffer.” Meanwhile, spoilers tease that Ridge and Caroline make a power move on Thursday – and in the sneak peek video Ridge (Thorsten Kaye) tells Rick to “step down as CEO” or else he and Caroline are going to the police and pressing charges against him for firing the gun at them.

So B&B fans, do you think that Rick will step down without a fight? If not, is Ridge bluffing, or will he really have Rick arrested? Do you think Brooke is upset that Caroline kissed another man, or upset that it was one of her men? Let us know what you think in the comments below and don’t forget to check CDL tomorrow for more “Bold and the Beautiful” spoilers and news.