‘The Bold and the Beautiful’ Spoilers: Will Caroline Sleep With Rick – Sabotage Ridge Relationship Without Brooke’s Help? 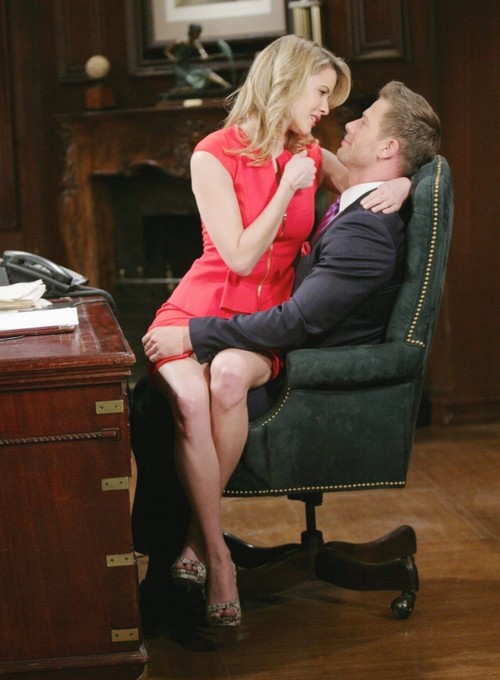 “The Bold and the Beautiful” spoilers reveal that Brooke (Katherine Kelly Lang) will be stirring up trouble for one happy couple on upcoming episodes. She’s recently made it her mission to come between Ridge (Thorsten Kaye) and Caroline (Linsey Godfrey) and she’s about to put her plan into action. B&B spoilers hint that she’ll try everything she can to break them up, but Ridge won’t change his mind. He’s firmly committed to his new love and believes he’s finally found the real deal. However, Brooke’s not about to let it go that easily. She’ll soon find a new accomplice to help drive a wedge between the pair. Could Steffy (Jacqueline MacInnes Wood) join forces with Brooke to break up her father and Caroline? It’s highly possible considering Steffy’s been griping about their relationship ever since she returned to “The Bold and the Beautiful.”

Another possibility is that Brooke could seduce Deacon (Sean Kanan) in an attempt to make Ridge jealous. She’s a brave woman if she decides to go up against crazy Quinn (Rena Sofer), who’s already called dibs on her man. Whatever happens, B&B viewers will be anxious to see if Brooke’s scheme will work. Love rarely lasts forever on soaps and this could be the beginning of the end for Ridge and Caroline.

However, other “Bold and the Beautiful” spoilers indicate that Ridge may not be to blame if the relationship falls apart. Rick (Jacob Young) will soon tell Maya (Karla Mosley) that he’s just been using her to make Caroline jealous. When it comes down to it, he’s likely still in love with his ex. Rumor has it that Caroline may succumb to temptation and sleep with him, which would obviously be a major blow to her new beau. If that turns out to be true, Brooke probably won’t need to do anything at all to convince Ridge to leave Caroline behind.

So B&B fans, what do you think about Brooke’s antics? Who will she team up with in her quest to break up Ridge and Caroline? Will she succeed or will Caroline sabotage the relationship on her own by sleeping with Rick? Would you like to see Rick and Caroline get back together or has he just gone too far off the deep end? Let us know what you think in the comments below and don’t forget to check CDL tomorrow more “Bold and the Beautiful” spoilers and news.