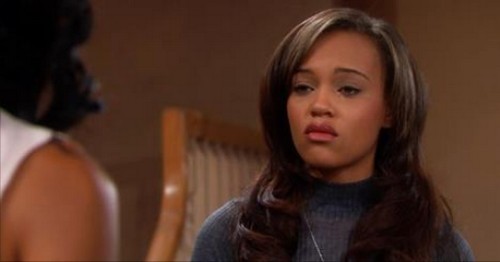 The Bold and the Beautiful spoilers have some shocking B&B rumors about a new character set to start working at Forrester Creations in the near future. Christian [TBA], a bisexual fashionista of sort, starts working at Forrester along side Nicole Avant [Reign Edwards] and Zende Forrester Dominguez [Rome Flynn]. These two are just starting to move from a friendly relationship to a romantic couple when Christian tries to put a wedge between these two.

Exploding Bold and the Beautiful spoilers are releasing new information about how Christian first tries to make the moves on Nicole, but than realizes it’s Zende who he is really interested in! More late breaking BB rumors lead us to believe Christian has Zende take a deep emotional look into his own sexuality. Christian wants Zenda to look at his true self and not be ashamed at what he may find. When Zende realizes he may not be who he thinks or claims to be, he goes directly to Nicole’s big sister Maya [Karla Mosley] and her best friend Nick [Scott Turner Schofield], who are both transgender for advice on his confusing dilemma.

Maya assures Zende she will keep his secrets from Nicole only as long as they are not intimate together and he has time to reflect on his emotions. But Nicole has other things on her mind. She’s making romantic plans for Zende and herself to go ahead and take the next big step together. Making Love.

With Christian now in the picture, Zende feels pressured by what he should do next. He wants to prove to himself that he is not gay and tries to be with Nicole. But their romantic interlude ends in disaster as Zende confesses his feeling for Christian right before the two make love.

What are your feeling on having a gay or bisexual couple on The Bold and the Beautiful? For many years, this show has been using controversial and progressive storylines to attract a range of viewers. Let us know your thoughts on the comments below. As always, CDL will keep you informed on all new B&B spoilers or late breaking news!