BY Heather Hughes on September 9, 2015 | Comments: one comment
Related : Soap Opera, Spoiler, Television, The Bold and the Beautiful 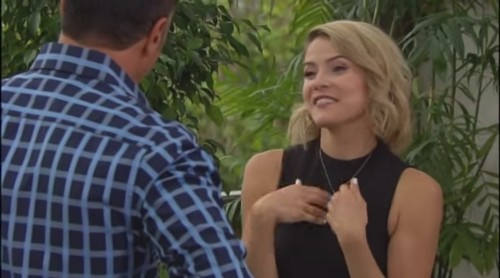 “The Bold and the Beautiful” spoilers for Wednesday, September 9, reveal that Ridge (Thorsten Kaye) and Caroline (Linsey Godfrey) will give everyone around the office the good news. They just got engaged and they’ll want everyone else to share their joy. Unfortunately, several people will have a big problem with this couple taking the next step. Steffy (Jacqueline MacInnes Wood) will give her father some tough love as she tries to figure out where his head is at. Ridge was completely against having any more children a few days ago. Now Ridge is pulling out a bassinet and claiming he’s ready to be a doting daddy again.

Steffy will remind Ridge that he didn’t want this and Caroline knew that. However, Ridge feels the need to make Caroline happy and if a baby is what it takes, then so be it. Brooke (Katherine Kelly Lang) will also throw her two cents in. Brooke made it clear that she thought Ridge had no business starting a family with Caroline and she’ll hold firm on that view. “The Bold and the Beautiful” spoilers say Brooke will suggest that Ridge is out of his mind. It’s not exactly a vote of confidence for Ridge and Caroline’s relationship, but it doesn’t matter who’s on their side as long as they have each other.

Meanwhile, Caroline will let Bill (Don Diamont) know where she stands. When Bill voices his displeasure at the thought of their upcoming nuptials, Caroline will insist that an engagement is something that you celebrate, not grieve. Bill will argue that he would be celebrating if Caroline was planning to marry someone besides Ridge. Of course, Caroline will dismiss Bill’s doubts and go ahead with her wedding plans. It’s doubtful that Bill will ever be fully on board with their union. Caroline might as well just move on and hope for the best.

As Bill balks at Caroline and Ridge’s romance, Thomas (Pierson Fode) will suddenly be in their corner. Steffy will wonder what’s up with her brother. Thomas had been giving Ridge and Caroline a hard time about their age difference, but he now appears to support their relationship. Thomas will likely stay tight-lipped about his hookup with Caroline, but Steffy will remain skeptical of Thomas’ abrupt turnaround. B&B rumors hint that Thomas and Caroline’s shocking secret will eventually create huge waves. Stick with “The Bold and the Beautiful” for updates on the storm that lies ahead.

So B&B fans, what do you think about the news that Ridge and Caroline will announce their engagement? Will Bill ever come around on the idea of this marriage? Can Ridge convince Brooke and Steffy that he’s ready for another child? Will Thomas come up with a good reason for changing his mind about Caroline and Ridge? Let us know what you think in the comments below and don’t forget to check CDL often for the latest “Bold and the Beautiful” spoilers, rumors, updates and news.

The Bold and the Beautiful video preview for September 9, Wednesday