‘The Bold and the Beautiful’ (B&B) Spoilers: Was it Rape? Furious Ridge Says Thomas Took Advantage of Vulnerable Caroline 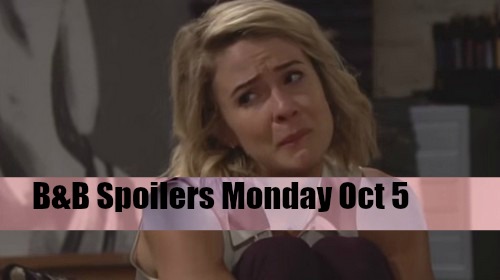 “The Bold and the Beautiful” spoilers for Monday, October 5, tease that Thomas (Pierson Fode) will admit he still has a lot of unresolved issues when it comes to his dad. When Thomas first came back to Los Angeles, he found it difficult to gain Ridge’s (Thorsten Kaye) approval. Likewise, Ridge believed Thomas felt entitled to more than he deserved. Though they initially tried to reach an understanding, their recent fight proved their problems are far from over. In fact, they’re only just beginning.

Thomas will suggest that he wants to have a good relationship with Ridge, but he doesn’t like feeling slighted and judged. B&B spoilers reveal that Steffy (Jacqueline MacInnes Wood) will scold Thomas for disrespecting their father. Steffy will add that Thomas needs to make this right. It seems Thomas might agree his reaction was a little over the top. Later this week, Thomas will apologize to Ridge in an effort to put the past behind them.

Unfortunately, Ridge won’t be interested in hearing anything Thomas has to say. After Friday’s revelation, Ridge will be furious that his son took advantage of a very vulnerable Caroline (Linsey Godfrey). Thomas isn’t entirely to blame for what happened that night although many B&B fans are claiming that what Thomas did was rape.

There’s no way Thomas could’ve known about the anxiety pills Caroline took before they started drinking heavily. Thomas couldn’t tell that Caroline was out of it because he was pretty out of it himself. Of course, it’s also possible Thomas saw what he wanted to see. Thomas was hoping Caroline would want him and he jumped to the wrong conclusion.

Regardless of why it happened, what’s done is done. Now Caroline will need to deliver the final blow of her big news. B&B viewers know Caroline spilled the details of her hookup with Thomas and she’ll have to come clean about her pregnancy as well – but that happens Tuesday, October 6.

“The Bold and the Beautiful” spoilers say Ridge and Caroline will find themselves at odds over what to do next. The rumors hint that Ridge will want Caroline to keep Thomas out of the loop on his child. Will Caroline agree to pretend this baby is Ridge’s? Stick with the CBS soap for updates on how they’ll proceed.

So B&B fans, what do you think about Steffy urging Thomas to patch things up with Ridge? Will that ever happen now that Ridge knows the truth? Can Caroline and Ridge overcome this huge obstacle in their relationship? Let us know what you think in the comments below and don’t forget to check CDL often for the latest “Bold and the Beautiful” spoilers, rumors, updates and news.