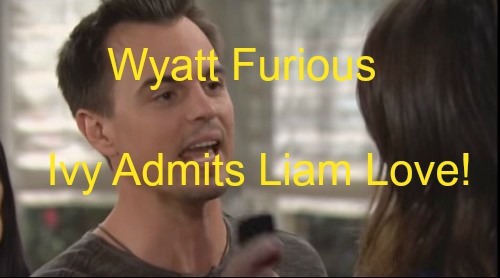 Once Quinn presses Ivy to reveal which man she really loves, things are going to get unbelievably tense.

Wyatt’s emotions will be all over the place when he hears that Ivy is hung up on his brother. The news should come as a shock at first. After he realizes Quinn knows what she’s talking about, Wyatt will go on the warpath.

“The Bold and the Beautiful” spoilers indicate that Wyatt will rip into Ivy for letting him look like a fool. Wyatt was willing to give Ivy a pass for her make-out sessions with Thomas (Pierson Fode), but her latest secret may be simply unforgivable.

Since Ivy has been harboring feeling for Liam, the thought of her accepting this proposal will infuriate Wyatt. Somehow Wyatt always ends up as the second choice for the women he dates.

To make matters worse, their first choice always seems to be Liam. B&B viewers can expect the drama to heat up even more later this week.

Meanwhile, Bill (Don Diamont) will press Brooke (Katherine Kelly Lang) to take the job offer at Spencer Publications. Katie (Heather Tom) is the ringleader of this effort, but Bill is backing her up. When Brooke refuses to come on board, Bill will try to work his magic.

Bill will insist that wants Brooke on his team, but he wants her happiness above all else. Unfortunately, Katie and Bill have opened a door that probably should’ve been left closed. Brooke’s old feelings for Bill will come rushing back and it could cause quite a storm.

Lingering love is a hot topic on “The Bold and the Beautiful” these days. Will Ivy and Brooke get back the men they long for? Time will tell, but it’s clear that their desires won’t sit well with some characters.

Stick with the CBS soap to see how Steffy (Jacqueline MacInnes Wood) and Katie will react to these resurfacing threats.

So B&B fans, what do you think about Ivy’s forced confession? Will Wyatt be able to recover from this blow? Will Bill be stunned by Brooke’s feelings for him? What will Katie do when she gets updates on Brooke’s love for Bill?

The Bold and the Beautiful (B&B) Video Promo for Tuesday, December 29 2015