The Bold and the Beautiful (B&B) Spoilers: Ivy Attacked by Steffy – Liam Breaks-Up With Steffy After Tragic Staircase Fall 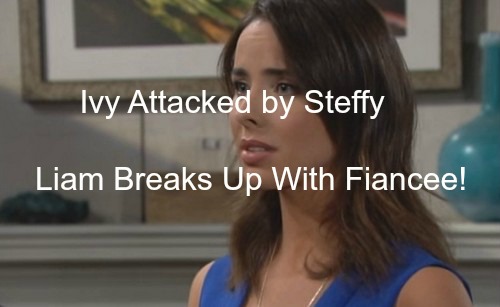 “The Bold and The Beautiful” (B&B) spoilers reveal that life is about to get so much worse for Ivy Forrester (Ashleigh Brewer) not only emotionally, but physically as well. We saw that Quinn Fuller (Rena Sofer) interrupted the proposal so Ivy never got a chance to answer – things go downhill from there.

It’s likely that Ivy would have come clean to Wyatt Spencer (Darin Brooks) with the truth about her feelings for Liam Spencer (Scott Clifton) but she never got the chance. We will see Wyatt hurt, humiliated, and outraged that he put his heart out there for Ivy when she wanted his brother.

Worse still is that he did it in front of Liam and Steffy Forrester (Jacqueline MacInnes Wood) and that makes it sting more. Quinn obviously has it in for Ivy and now Wyatt will turn on his GF. He will rail at Ivy about being the consolation prize when she couldn’t have his brother.

Ivy is in no condition to handle this emotional assault from Wyatt and accusations from Quinn when she’s just suffered a near-death trauma. To make things worse, Ivy will also be under yet another assault at Steffy’s hands soon.

After Wyatt’s explosion, Ivy will have to move out of the beach house and back to the Forrester mansion – and that’s the site of Steffy’s third confrontation against Ivy that turns violent. In the aftermath of this mess, it looks like Liam will be the only one with a kind word for Ivy.

Liam has to believe now that Ivy really cares about him since she was willing to withstand the onslaught from Wyatt and Quinn over her feelings for him. Even if you don’t like Ivy, you have to admit she’s just following her heart and there’s some nobility in that.

In fact, her willingness to confess to Wyatt that the electrocution made things clear for her and she can’t help how she feels about Liam may loosen something in Liam himself. Liam has been hedging with Ivy partially to protect Wyatt’s feelings.

But now that all the drama is out there and Wyatt knows, Liam doesn’t have to worry about Wyatt’s feelings. That sounds bad, but the milk is spilt. Now Liam can openly assess whether he has residual feelings for Ivy and he finds that he does.

Soon, Liam will admit to Ivy that there is still love there for her in his heart, but he’s engaged to Steffy and isn’t going to throw that away. However, Steffy won’t be so cautious. She’ll overhear Ivy and Liam talking and pull another of her over-the-top stunts.

Steffy will first confront Liam about his feelings for Ivy. But does Steffy have a right to be angry at either of them? Ivy is right – Steffy came back to LA and stole Liam from Ivy. That means that neither Liam nor Ivy had any closure on their relationship.

If Steffy had stayed out of it, perhaps Liam and Ivy would have ended their relationship organically and it would have been a closed book. But because Steffy hijacked Liam from Ivy, those feelings were left open and unresolved. In a way, this is all Steffy’s fault.

And once again, instead of seeing that she has any responsibility in this, Steffy will blame everything on Ivy. During her confrontation with Liam, he will tell Steffy to leave Ivy alone. This could all work out peacefully as Ivy decides to take a break from LA after the ugly scene with Wyatt and Quinn.

That should give breathing room for all of this to calm down. Liam knows this and tells Steffy to just let it go. But Steffy won’t. She always does whatever she feels like and doesn’t listen to anyone. Ivy is right that Steffy is not compatible with Liam precisely because of this behavior.

Steffy finds Ivy all packed to head back to Australia and stages a bitter and needless confrontation with her at the top of the stairs. Will this showdown end with Steffy hurting Ivy for a third time in as many weeks? Or will it be Steffy that goes tumbling down?

Either way, no matter which cousin ends up hurt and lying at the bottom of the stairs, it’s on Steffy. It didn’t have to go down this way. If Steffy hadn’t shoved Ivy into the electrical panel at Forrester Creations, Ivy would not be opening her heart to Liam again.

Steffy not only wants absolutely everything to go her way, but she wants to be a jerk about it too. It will serve her right if Liam calls off their engagement for her abusive behavior towards Ivy. In a way, getting electrocuted might end up being the best thing that ever happened to Ivy.

That shocking situation could result in her getting Liam back and giving Steffy some payback for stealing him and then acting like she did nothing wrong. What do you think B&B fans, does Steffy deserve to be dumped? Or is Ivy not the innocent here and is the one who deserves to be punished?

Share your thoughts in the comments below and check back with CDL for more on this ongoing romantic quadrangle as well as other “The Bold and The Beautiful” spoilers and news.