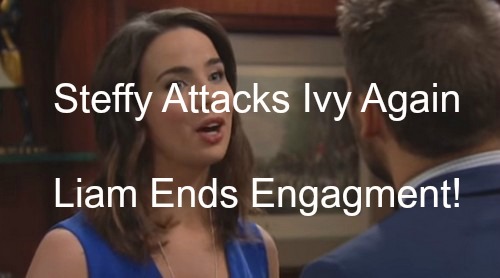 “The Bold and The Beautiful” (B&B) spoilers indicate that the holidays hold more horrors for Ivy Forrester (Ashleigh Brewer) when Steffy Forrester (Jacqueline MacInnes Wood) hurts her again – this time perhaps worse than the other two attacks.

In the aftermath of this assault, it looks like Liam Spencer (Scott Clifton) will finally have enough of Steffy’s violent and erratic ways and will break things off with her. Here’s how all of this will play out in coming days…

Wyatt Spencer (Darin Brooks) will go ahead with his proposal to Ivy only to have Quinn Fuller (Rena Sofer) blow it up by demanding that Ivy tell Wyatt the truth about how she feels about Liam. She likely won’t even give Ivy a chance to turn down the proposal – which was the probable outcome.

With Liam still with Steffy and things messed up with Wyatt, it looks like Ivy will pack her bags to move back to Australia. But before she goes, Liam finally admits he still has feelings for her. Unfortunately, Steffy overhears Liam’s confession to Ivy.

Steffy confronts Liam about his affection admission and they have a major confrontation. At the end, Liam once again cautions Steffy to stay away from Ivy since she’s leaving town anyway. But Steffy, of course, will not do as he asked.

Steffy will start a showdown with Ivy at the top of a flight of stairs with Ivy’s luggage underfoot. Anyone can see where that’s heading. B&B spoilers indicate that accident-causing Steffy will knock Ivy down the stairs seriously injuring her.

This will be the last straw for Liam. How many times can he look past Steffy’s rivals being harmed? Ivy has reminded Liam several times lately that Steffy is not the same kind of person that Liam is – she’s told him that Steffy is volatile and dangerous and now Steffy has hurt Ivy yet again.

Liam will break it off with Steffy which means now both Liam and Ivy are available – as are Steffy and Wyatt. With Steffy dumped and Wyatt betrayed, look for Quinn to steer Wyatt and Steffy right into each other’s arms since Steffy is who Quinn wants for Wyatt anyway.

And with Wyatt and Steffy both out of the picture, does that mean Ivy and Liam will finally get another shot at love? Will Liam nurse Ivy back to health and then give her the second shot at love she’s been begging for?

One complication in this scenario is Thomas. Could Thomas try to snap up Ivy fresh off her split from Wyatt? Can he turn Ivy’s head when she’s so focused on Liam? Thomas seemed to have genuine affection for Ivy so he may throw his hat into the ring as well.

Stay tuned to CDL for more on the couple swapping antics of the younger set on B&B and come back for more “The Bold and The Beautiful” spoilers and more.