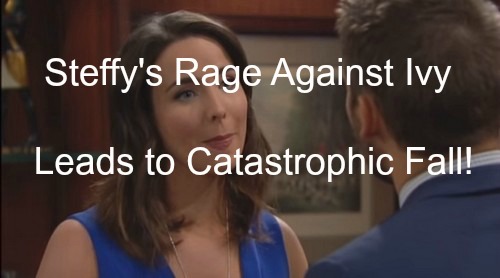 “The Bold and the Beautiful” spoilers reveal that Ivy (Ashleigh Brewer) will soon be feeling a little lost. After Quinn (Rena Sofer) derails Wyatt’s (Darin Brooks) proposal, the ugly truth will come out. Ivy will tell Wyatt she’s in love with Liam (Scott Clifton). Naturally, this is going to cause quite a commotion.

First, we’ll have heartbroken Wyatt. He thought Ivy was completely devoted to him, but he’ll have to accept that she prefers his brother. Without hope for a future with Liam or Wyatt, Ivy will decide she might as well return to Australia.

Here’s where things could get interesting. “The Bold and the Beautiful” spoilers indicate that Liam will tell Ivy that he loves her.

It’s not exactly clear where Liam stands on Ivy. It’s possible that Liam just means a part of him will always love Ivy. Liam may even mean he loves Ivy as a friend. Still, there’s a chance that Liam is waffling once again. No matter how Liam feels, it will lead to big trouble.

Steffy (Jacqueline MacInnes Wood) will overhear Liam’s declaration of love and she’ll fly into a rage. After confronting Liam, Steffy will head over to the Forrester mansion to give Ivy a piece of her mind. Steffy assumed she’d finally won Liam over for good, but it appears this war is far from finished.

“The Bold and the Beautiful” spoilers tease that Steffy and Ivy will get into another heated argument. Their confrontations usually end with someone getting hurt and this time will be no different. Either Steffy or Ivy will trip over some suitcases and fall down the stairs. The question is: which cousin will take the tumble?

If it’s Ivy, then she’ll probably regret calling off that restraining order. In addition, Ivy will have earned the title of clumsiest character of the year. We should point out that Liam will walk in as one of them falls (undoubtedly in epic slow motion). Will Liam really stick with Steffy if she leads to injuries for Ivy AGAIN? It’s tough to say.

Of course, what goes around comes around. Maybe it’s Steffy’s turn to be in harm’s way. However, that scenario might make Liam side with Steffy. That doesn’t seem to be the direction B&B writers are headed in. Instead, a partner swap could be in the works for Steffy and Ivy.

Nevertheless, anything can happen. On a soap, storylines can zig when you think they’ll zag. Stay tuned to “The Bold and the Beautiful” for updates on which Forrester will plummet down the staircase.

So B&B fans, what do you think about the news that Ivy will announce her plans to move back to Australia? Will Steffy or Ivy be the one who falls? Will Liam get back together with Ivy after all of this?

Will Steffy hook up with Wyatt? Let us know what you think in the comments below and don’t forget to check CDL often for the latest “Bold and the Beautiful” spoilers, updates and news.