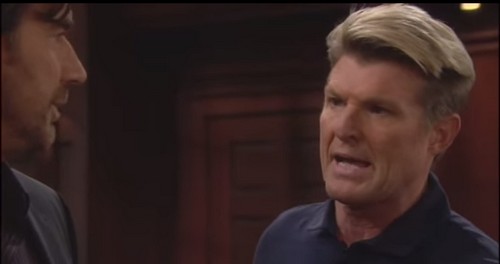 “The Bold and the Beautiful” spoilers for Wednesday, July 29, tease that Thorne (Winsor Harmon) will struggle to come to grips with Aly’s (Ashlyn Pearce) death. Thorne will question how Aly could simply fall, hit her head and end up dead. Of course, B&B viewers know that Thorne’s suspicions are justified. Eventually, a grief-stricken Thorne will lash out at Steffy (Jacqueline MacInnes Wood) and indicate that he doesn’t believe her story.

It’s clear that there are some doubts surrounding Steffy’s version of events. Steffy acted in self-defense, but she isn’t being honest about striking the blow that caused Aly to stumble. It would be better if Steffy would just come clean now, but she’s too fearful of the potential consequences. As Wyatt (Darin Brooks) told Ivy (Ashleigh Brewer), the truth could be dangerous.

Nevertheless, Ivy wants Steffy to pay for what she’s done. Calling this murder is a bit of a stretch, but Ivy is hurting and likely needs someone to blame. To make matters worse, Liam (Scott Clifton) just dumped Ivy for Steffy. Now Ivy has essentially lost two people she loved because of Steffy’s actions. “The Bold and the Beautiful” spoilers reveal that Wyatt will try to comfort Ivy as she deals with extreme heartache. It looks like Ivy will appreciate Wyatt’s support. The pair will share a passionate kiss later this week.

Meanwhile, Thomas (Pierson Fode) will try to prove his worth to his father. Ridge (Thorsten Kaye) doesn’t seem too thrilled about the idea of Thomas joining the design team at Forrester Creations. However, Ridge’s hesitancy could be based on more than pure talent. We have to remember that Caroline (Linsey Godfrey) and Thomas are former flames. Ridge may be worried that Caroline will trade him in for a younger Forrester.

It appears Caroline might sense the potential competition between brothers. “The Bold and the Beautiful” spoilers say Caroline will prove a point by being overly affectionate with Ridge. The lovey-dovey display may put Ridge’s mind at ease, but it won’t deter Thomas. B&B rumors hint that Thomas will find himself increasing drawn to Caroline in the coming weeks. Stay tuned to the CBS soap for updates on where their working relationship will lead.

So B&B fans, what do you think about the news that Thorne will refuse to believe Aly’s death was an accident? Will Ivy leak the video she shot at the scene? Are Wyatt and Ivy set to become a new pairing? What about Thomas and Caroline? Let us know what you think in the comments below and don’t forget to check CDL tomorrow for the latest “Bold and the Beautiful” spoilers, rumors, updates and news.