The Bold and the Beautiful Spoilers: Rick Proposes to Maya at Fashion Show – Wyatt Supports Ivy as Liam and Steffy Get Flirty 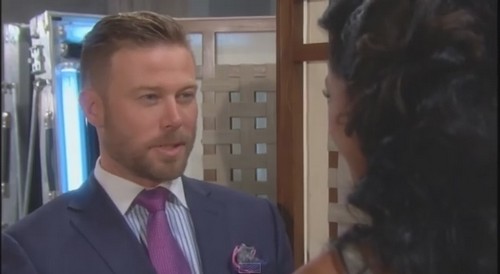 “The Bold and the Beautiful” spoilers for Monday, July 20, tease that Ivy (Ashleigh Brewer) will feel heartbroken when she sees Liam (Scott Clifton) and Steffy (Jacqueline MacInnes Wood) enjoying some flirty fun at the fashion show. Ivy will feel like Liam is slipping away. Unfortunately, Ivy doesn’t realize that her relationship with Liam is essentially already over. Liam told Steffy that he was choosing her and he’d break the news to Ivy later. It appears Ivy has a hunch about what’s coming. As a result, a distraught Ivy will once again lean on Wyatt (Darin Brooks) for support.

Ivy and Wyatt have been growing quite close over the last few weeks. It’s easy to see how they could make the transition from friendship to romance. However, down-the-road “Bold and the Beautiful” spoilers reveal that there could be trouble brewing for Steffy and Liam’s relationship. A startling secret could come between them. Will Liam waffle once again and realize that Ivy is the only one he can truly trust? The rumors hint that it’s a possibility. Stick with B&B to find out who Liam will end up with.

Meanwhile, Pam (Alley Mills) will lament the fact that she didn’t make lemon bars for everyone at the fashion show. Charlie (Dick Christie) will assure Pam that sugar is the last thing those people need. Tranquilizer darts would be more appropriate. From models and designers to executives and reporters, it seems they’re all caught up in the excitement of the big day.

As the show winds down on Tuesday’s episode, Rick’s (Jacob Young) actions will kick the excitement up even further. Rick will get down on one knee and ask Maya (Karla Mosley) to marry him. Now that Rick knows Maya is transgender, he intends to show her that he loves who she is and he wants her to be his wife. What will Julius have to say about this shocking proposal? Stay tuned to “The Bold and the Beautiful” to see how Julius will react when Rick and Maya make some updates to their relationship.

So B&B fans, what do you think about the Wyatt supporting Ivy? Will they become a couple or will Liam find his way back to Ivy eventually? What about Rick popping the question? Are you glad that Rick and Maya are moving forward with their relationship? Let us know what you think in the comments below and don’t forget to check CDL tomorrow for the latest “Bold and the Beautiful” spoilers, rumors, updates and news.

The Bold and the Beautiful video preview for Monday, July 20