‘The Bold and the Beautiful’ Spoilers: Will Quinn and Deacon Marriage End in Divorce – The Carter Curse Strikes Again? 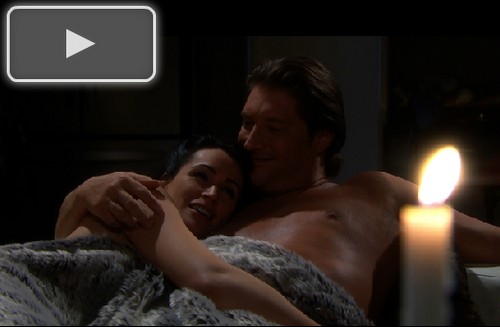 The Bold and the Beautiful spoilers and news asks a key question about the Deacon & Quinn wedding – was it jinxed before it even began? Carter (Lawrence Saint-Victor) ask if there any reason why the odd couple shouldn’t be married and Brooke Logan Forrester (Katherine K. Lang) storms in and yells STOP! Quinn tells her that she can’t stop it from happen. Brooke says she might not able to but someone else can.

Brooke produces the iPad with Hope Logan (Kim Matula) on the screen. Hope pleads her case listing every reason why she doesn’t want her father Deacon Sharpe (Sean Kanan) marrying Quinn. Hope has every reason to feel great dislike for Quinn, after everything she did to destroy her life, directly and indirectly. Hope did tell Deacon that if he marrys Quinn that he will never be a part of her life as long he is married to her.

Despite Hope’s and Brooke’s objections, Deacon still marries Crazy Quinn. So now that they are married but how long will this B&B marriage last. Reason why we ask is look at the track record that Carter has for marrying B&B Couples. Were they jinxed from the start.

Liam Spencer (Scott Clifton) and Steffy Forrester (Jacqueline MacInnes Wood) were married by Carter. It all seemed like an upbeat wedding with the bride coming up the driveway in motorcycle dress wearing a black jumpsuit. But the reason for this marriage was because the bride was with Liam’s child. Yes Steffy loved Liam but the groom wasn’t in love with the bride. Liam was about to marry Hope Logan (Kim Matula) the love of his life. When Steffy stopped the wedding to tell Liam that she was carrying his child it was a startling moment in “Bold and Beautiful” history! Liam and Hope agreed that they shouldn’t get married because they would rather have Liam raise his child in a family. This shouldn’t be the reason why you marry someone.

Next marriage with the Carter bad luck stamp was Rick Forrester (Jacob Young) to Caroline Spencer (Linsey Godfrey). Brooke Logan Forrester flew Caroline in from New York City for a job interview as a designer but the plan was to use Caroline’s arrival as collaborator with Rick and his new line. Brooke’s ulterior motive was to distract Rick from Amber Moore (Adrienne Frantz). The relationship with Caroline started out well but begins to suffer when Rick meets a woman named Maya Avant (Karla Mosley). Caroline’s treatment of Maya has Rick end their relationship and it’s were Rick starts to date Maya. Caroline makes her mission to win back Rick by helping him with rebranding of “Hope for the Future.” Which plays on Maya’s insecurities which a series of misunderstandings causes Maya to break up with Rick. Rick starts to date Caroline once again and the two become engaged. With the insistence of Rick, they wed in front of their family and friends at the Forrester Mansion on Thanksgiving.

Furthermore, the point is that these two marriage seemed to start in the right direction but ended in divorce. Could Carter be the jinx that signals that these marriages will disintegrate? Is Carter an unlucky omen?

Deacon and Quinn do bring the best out of each other when together. Fans can see them being a couple that will last. But Quinn isn’t a normal person in any sense of the word. This woman seems to creative problems where none exist. Fans see this negative aspect of Quinn and know that it could end her marriage to Deacon. Also bearing on this prognostication is the historical fact that Quinn can’t seem to control herself for too long. Deacon can’t expect anyone to feel sorry when the bottom drops out on him when Quinn starts her inevitable downward spiral. Brooke and Hope warned him that Quinn isn’t the type of person that can change. Whatever happens to Deacon he will have to realize that they were right about Quinn. Come Back to CDL for more “The Bold and the Beautiful” spoilers, news and updates!