‘The Bold and the Beautiful’ Spoilers: Hope Threatens Deacon Not To Marry Quinn – Liam Poisons Nicole’s View of Rick

BY Heather Hughes on April 20, 2015 | Comments: one comment
Related : Soap Opera, Spoiler, Television, The Bold and the Beautiful 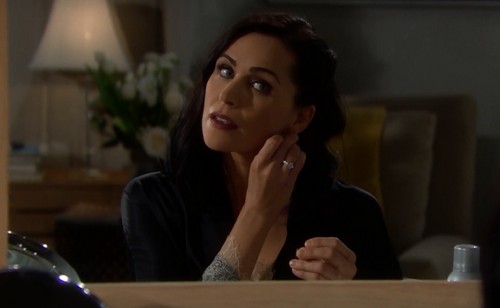 “The Bold and the Beautiful” spoilers for Monday, April 20, tease that Liam (Scott Clifton) will get to work on winning Nicole’s (Reign Edwards) favour. Wyatt (Darin Brooks) has already been trying to charm Nicole, but it seems Liam isn’t content to sit on the sidelines. Liam will make it clear to Nicole that he’s not happy with the way Rick has been treating Ivy (Ashleigh Brewer) and Aly (Ashlyn Pearce). Perhaps the Spencer brothers are hoping they can taint Nicole’s view of Rick (Jacob Young) and she’ll give up the secret that could bring Rick’s empire crumbling down.

If Nicole and Maya (Karla Mosley) don’t stop having heated conversations in unlocked rooms, Nicole probably won’t have to spill much of anything. B&B viewers know that eavesdropping and ajar doors have led to many big reveals. The rumors say even more employees at Forrester Creations will overhear that Maya used to be a man. By the time Rick finally gets updates, half the company should be in on the details on Maya’s sex change. It looks like poor “Ricky” will be the last to know. Stick with “The Bold and the Beautiful” to see who else will find out before Rick gets the shocking news.

Meanwhile, Hope (Kim Matula) will plead her case to Deacon (Sean Kanan). Quinn (Rena Sofer) and Deacon got all dressed up for their wedding with a whopping guest total of one. It’s puzzling why they even bothered. If Deacon and Quinn had just thrown something together at the courthouse, they could have saved themselves a lot of trouble. Instead, they ended up with Brooke (Katherine Kelly Lang) making a last-minute attempt to spoil their wedded bliss. Now Deacon will find himself staring at a tablet as Hope drones on about how she can’t accept his marriage. Like mother, like daughter.

Hope certainly has plenty of reasons to hate Quinn, but Deacon is a grown man and he intends on making his own decisions. If Deacon wants to spend the rest of his life with a psycho, that’s his prerogative. Hope will tell Deacon that Quinn will never be a part of her life. If Deacon marries Quinn, he won’t be in Hope’s life either. Of course, Hope’s been holed up in Italy for months so it’s not like she has much to do with Deacon anyway. Stay tuned to “The Bold and the Beautiful” to see if Deacon will marry Quinn despite Hope’s objection.

So B&B fans, what do you think about Liam trying to get on Nicole’s good side? Will Nicole ever wise up to the fact that the Spencers are playing her? What about Hope’s desperate plea? Will Deacon choose to marry Quinn and risk alienating his daughter forever? Let us know what you think in the comments below and don’t forget to check CDL tomorrow for the latest “Bold and the Beautiful” spoilers, rumors, updates and news.