‘The Bold and the Beautiful’ Spoilers: Brooke Marries Deacon To Save Him From Quinn Wedding? 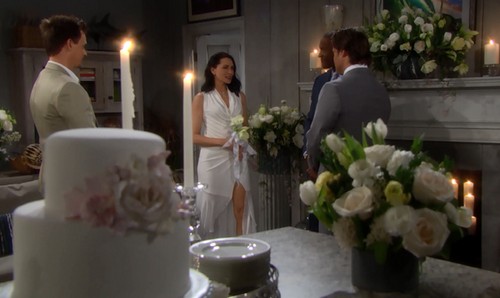 The Bold and the Beautiful spoilers are hearing about the surprising actions that a concerned friend makes in order to save her dear friend from the biggest mistake of his life! B&B rumors are reporting that Brooke Logan [Katherine Kelly Lang] offers to marry her long time friend and father of her daring daughter Hope [Kim Matula], in order for Deacon Sharpe [Sean Kanan] to avoid marry his current fiancée, crazy Quinn Fuller [Rena Sofer]. Apparently, in a desperate last ditch effort to stop the nuptials between Deacon and Quinn, Brooke basically ‘kidnaps’ Deacon right before his wedding ceremony.

After Brooke asked their daughter Hope to intervene and stop the wedding, Deacon chooses to still carry on with the wedding. Brooke, feeling desperately certain that Deacon not marry a loony nutcase, thinks marrying Deacon herself would be the only remaining option to stop the craziness about to consume his life forever. We are also learning that Deacon is so overwhelmed with the amount of concern Brooke shows for him that he agrees to their secret wedding ceremony leaving Quinn on her own.

Of course this news of Brooke becoming the next Mrs. Deacon Sharpe, will not go over well with Quinn or Brooke’s family – to say the least!

In other Bold and the Beautiful news sources report crazy Quinn gets much more threatening in her psychotic revenge plot against Brooke and Deacon and vows both of them will pay for crossing and betraying her. Brooke’s family, with her new brother in law Bill Spencer [Don Diamont] leading the way, will try and put an end to his ex lover’s marriage anyway he can. We wonder, will Quinn’s son Wyatt [Darin Brooks] be strong enough to handle his mother during this next go around of ‘crazy’ or will Wyatt get caught up in his mother’s plot and actually assist her? Desperate times may just need desperate acts to save Brooke, Deacon and Quinn from herself. We know for a fact that when Quinn is acting like a loose canon, she definitely brings a lot of excitement to each episode of The Bold and the Beautiful – and sometimes violence! Come back to CDL for more The Bold and the Beautiful spoilers and updates!