‘The Bold and the Beautiful’ Spoilers: Kim Matula Wants To Return As Hope Logan – Movie Career Not Taking Off? 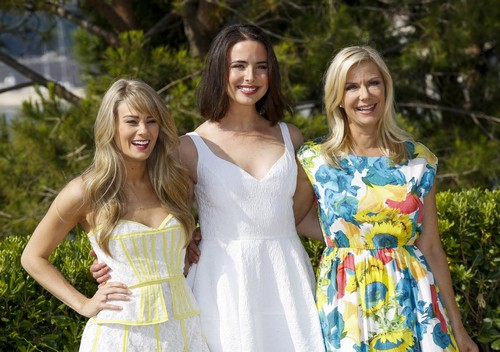 “The Bold and the Beautiful” spoilers and coming and going news confirms that Kim Matula is headed back to the CBS soap, and her character Hope Logan will be featured in episodes airing on Friday April 17 and Monday April 20. According to B&B spoilers, Hope Logan will still be out of the country, but she will be video-chatting with someone and getting caught up on all of the drama at Forrester Creations since she departed in December.

When “Bold and the Beautiful” spoilers first confirmed that Kim Matula was leaving the CBS soap, she stated that it was because she wanted to pursue other projects and branch out in to a movie career. But, according to the latest edition of CBS Soaps In Depth, Kim actually wants to return to “Bold and the Beautiful.” The magazine reveals, “Insiders have hinted that this might not be the last viewers will see of Matula, who has expressed an interest in returning to her soap stomping grounds for occasional cameos as her schedule permits.”

Word on the Internet is that Kim Matula’s schedule permits quite a few of cameos right now – and the reason she is showing interest in bringing Hope Logan back to “Bold and the Beautiful” is because finding work is proving to be much more difficult than she anticipated. And, it sounds like B&B’s producer Bell knew that Matula would come back – because originally he stated they were recasting the character, and then a month later he announced that they had decided not to recast.

“Bold and the Beautiful” spoilers and upcoming storylines hint that this is a perfect time for Hope Logan to return to the soap’s canvas – with her mother Brooke and Deacon reconnecting, and the turmoil her brother has created at Forrester Creations. What do you think B&B fans? Would you like to see Kim Matula return full-time as Hope Logan, or do you like the soap better without her? Do you think Matula will get the big movie break she has been searching for, or is it just a matter of time before she is back full time? Let us know what you think in the comments below and don’t forget to check CDL tomorrow for more “Bold and the Beautiful” spoilers and news.