The Bold and the Beautiful’ Spoilers: Hope Logan Only Appearing Via Video Chat, Maya Investigates Nicole 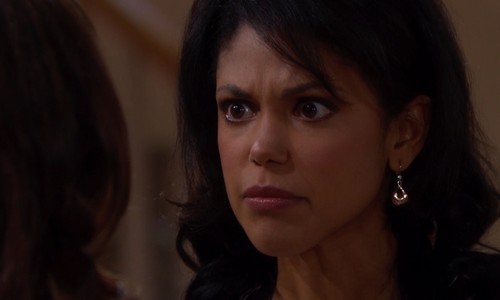 When “Bold and the Beautiful” spoilers and coming and going news revealed that Maya’s sister Nicole was headed to the CBS soap, rumor had it that she would stir up some serious drama for her big sister – and during the week of March 16 she will be doing just that. According to spoilers for the CBS soap, Nicole continues to rub Maya the wrong way when she crashes a Forrester Creations photo shoot. Maya (Karla Mosley) gets a bad vibe from Nicole (Reign Edwards), and thinks that she is hiding something and up to no good – so she orders Carter to run a background check on her own sister! B&B spoilers tease that during the week of March 16th some light will finally be shed on Maya’s history – and it will explain some of the questionable decisions that she has made since arriving at Forrester Creations.

In other “Bold and the Beautiful” news, CBS soap spoilers reveal that Brooke Logan (Katherine Kelly Lang) will continue to fight her inner demons – and the leading lady will have a tough time maintaining her sobriety. But her baby-daddy Deacon Sharpe (Sean Kanan) falls for her damsel in distress act hook, line, and sinker. Spoilers tease that while Deacon is catering to his old flame, Brooke, Wyatt (Darin Brookes) tries to convince his mother Quinn (Rena Sofer) to reconsider her engagement and not rush into marriage.

“Bold and the Beautiful” spoilers and coming and going news also recently revealed that Kim Matula was on the CBS set on March 4 filming scenes for an upcoming episode. The air date of Hope Logan’s scene is still up in the air, but according to new spoilers in the latest edition of Soap Opera Digest, Hope is not returning to Los Angeles and her appearance will be via video chat with someone.

So B&B fans, what do you think of Maya’s sister Nicole? What is she up to, will the background check uncover something? Will Quinn and Deacon actually make it down the aisle? Or will he wind up back with Brooke Logan? Are you happy that Hope isn’t returning to Los Angeles, or were you hoping that her return would be more permanent? Let us know what you think in the comments below and don’t forget to check CDL tomorrow for more “Bold and the Beautiful” spoilers and news.