The Bold and the Beautiful (B&B) Spoilers: Is Pierson Fode Cast As New “MacGyver” – Thomas Leaving B&B For Primetime? 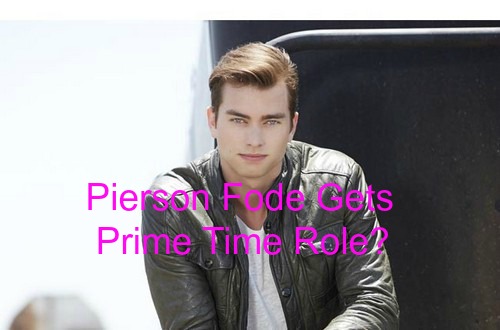 “The Bold and the Beautiful” (B&B) spoilers indicate that Pierson Fode could possibly be cast as the new MacGyver. Is Thomas Forrester leaving “B&B” for primetime? During an interview with Lilly Melgar (Lily Corinthos, “General Hospital”) and Martha Madison (Belle Brady, “Days of Our Lives”) on their tradiov.com “Soap Box” talk show Wednesday, November 19, Martha asked Fode if he was the type of person who is good under pressure.

“If there is crisis can you deliver?” Martha asked. Fode replied that he thrives under pressure. Pierson laughingly said if you give him duct tape and a moped he will can make a plane.

Madison joked back, “You know, they’re looking for a new MacGyver!” Pierson joked back, “Hey! Hey, call me! My agent…” Is it possible that Pierson would leave “The Bold and the Beautiful” if asked to make the move to primetime?

CBS announced plans for a reboot of the popular primetime series “MacGyver” in October 2015. The new show will follow a 20-something MacGyver “as he gets recruited into a clandestine organization where he uses his knack for solving problems in unconventional ways to help prevent disasters from happening.”

This certainly sounds as if it is a role Pierson could play! The actor is exactly the same height – 6-foot 2-inches tall – and has a similar build that Richard Dean Anderson had in the 1980s.

It was rumored that “The Young and the Restless” Justin Hartley would possibly vacate the role of Adam Newman in order to move to primetime as the new MacGyver.

But Justin Hartley recently signed a two-year contract with “Y&R,” which means Justin isn’t available to make the move to primetime. Could Pierson be taped to fill the role previously portrayed by Richard Dean Anderson from 1985 until 1992?

Pierson Fode took over the role of Thomas Forrester about six months ago. There is no information regarding Pierson’s current contract. Thomas hasn’t had a serious love interest since being torn between Caroline Spencer (Linsey Godfrey) and Hope Logan (Kim Matula).

Is it possible that Thomas will leave town in order to facilitate Fode’s exit from the “The Bold and the Beautiful”?

What do you think “B&B” fans? How would TPTB write-off Thomas if Pierson Fode were taped for the role of “MacGyver”? Or will the role simply be recast of Pierson decided to make the move to primetime?

Let us know what you think in the comments section below and come back to CDL for “The Bold and the Beautiful” as well as all your other soap opera news and updates.

The Bold and the Beautiful Video Promo for Monday, November 23