The Bold and the Beautiful (B&B) Spoilers: Ivy Confesses Love to Liam, Hates Steffy – Will Wyatt Swap Girlfriends with Bro? 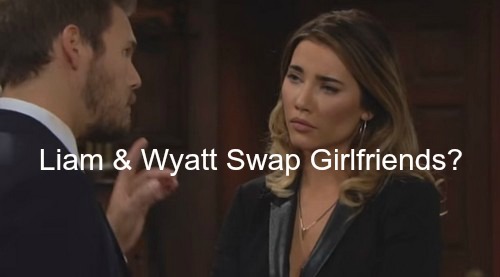 “The Bold and the Beautiful” (B&B) spoilers tease that Ivy’s (Ashleigh Brewer) motive for punishing Steffy could be more complicated than anyone realized. Ivy has been on edge ever since Steffy accidentally pushed her toward the faulty electrical wires. During their next confrontation, Ivy took another scary tumble.

Now Ivy claims to be terrified of Steffy and she just wants her to stay away. However, there could be another reason Ivy is so intent on making Steffy pay the price for her actions. Steffy definitely violated the restraining order and she deserved to face the consequences.

Nevertheless, the fact that Ivy even filed a restraining order was probably a bit extreme. It seems Ivy and Steffy are driving each other crazy over all of this.

Liam (Scott Clifton) will chat with Ivy and try to understand where she’s coming from. By the end of their conversation, it will become clear that there’s an underlying issue. “The Bold and the Beautiful” spoilers indicate that Ivy will make a stunning confession.

Ivy will suggest that her near-death experience gave her some clarity on the situation. Liam will listen as Ivy describes her dilemma and admits that she’s still in love with him.

Obviously, this will be a lot for Liam to take in. Liam felt somewhat guilty when he dumped Ivy, but he felt a little better when she turned to Wyatt (Darin Brooks). Now it looks like Wyatt was really nothing but a rebound.

Ivy cares about Wyatt, but it doesn’t appear to be true love. Unfortunately, that’s likely how Liam feels about Ivy.

Ivy’s make-out sessions with Thomas (Pierson Fode) make more sense now. Perhaps Ivy was trying to fill the void Liam left in her heart. Wyatt didn’t cut it and neither did Thomas. If Ivy plans on getting over Liam, she’ll just have to make the decision to let go and move on.

Of course, there’s always the chance that Liam could bond with Ivy once again. Wyatt’s interest in Steffy may not be off the table either. Could we see these brothers swap partners?

B&B viewers might see a couple of shakeups soon. Stick with “The Bold and the Beautiful” for updates on which romances will sizzle.

So B&B fans, what do you think about Ivy’s jaw-dropping news for Liam? Will Liam let Ivy down gently or could he start to fall for his former flame? What does the future hold for all parties involved? Let us know what you think in the comments below and don’t forget to check CDL often for the latest “Bold and the Beautiful” spoilers, updates and news.