The Bold and the Beautiful (B&B) Spoilers: Will Ivy Threaten To Expose Why Steffy Fired Her – Copy of Aly’s Death Tape Exists? 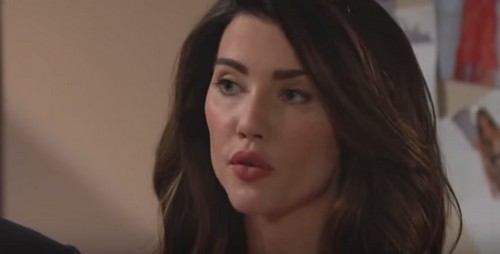 “The Bold and the Beautiful” (B&B) spoilers may lead into Ivy Forrester (Ashleigh Brewer) staying one step ahead of Steffy Forrester (Jacqueline MacInnes) Wood by revealing the real reason she was fired. There have already been questions surrounding Ivy’s abrupt dismissal as the Face of Forrester. The president of Forrester Creations still hasn’t come up with a plausible excuse for that move. Will Ivy blackmail Steffy again, or use the real reason she was fired by Steffy to gain leverage with Bill?

Speculation is that Ivy didn’t delete every copy of the tape and will be forced to use it against Steffy for her part in Aly Forrester’s (Ashlyn Pearce) death. Could Ivy get her job back by threatening to publicly disclose the reason Steffy fired her AND bringing forth the incriminating tape to prove it. Just how would Steffy talk her way out of that one? She would get hit with a murder charge AND lose her executive position at Forrester.

Or Wyatt Spencer (Darin Brooks) could help his girlfriend blackmail Steffy in another way. If Bill Spencer (Don Diamont) sticks to his guns and refuses to financially back Wyatt’s dream of running his own fashion house the couple just may resort to another tactic. They could pressure Steffy – and Wyatt’s brother Liam Spencer (Scott Clifton) – into putting pressure on Bill to give Wyatt a chance at running his own fashion house.

Of course this might seem very suspicious to Bill, but Liam could always offer the explanation that he’s trying to make amends with his brother Wyatt and that he fully supports Wyatt’s decision to strike out on his own – with Ivy as his number one designer.

The threat of Ivy exposing Steffy just may remain out there – unless Ivy really did delete the tape. Do “B&B” fans actually believe she did? Does Ivy still want to be the Face of Forrester or does she want to begin a new business? Ivy and Wyatt have the opportunity to use a fashion division of Spencer Publishing as a force with which to be reckoned in the industry. But Ivy claims she is on a mission to get justice for Aly and we’re guessing the battle between Ivy and Steffy isn’t over yet when it comes to that supposedly incriminating tape.

What do you think will happen? Is Ivy going to use blackmail again to get what she wants? Voice your opinion in the comments below and don’t forget to come back to CDL for all “Bold and the Beautiful” spoilers, rumors, updates and news!

The Bold and the Beautiful Video Preview for Monday, September 28