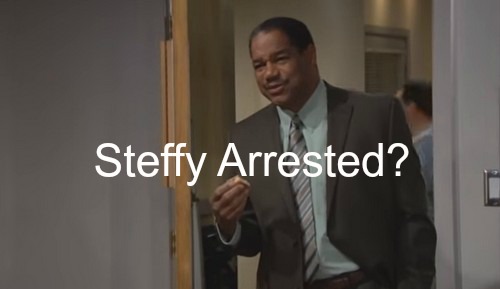 “The Bold and the Beautiful” (B&B) spoilers reveal that Steffy Forrester (Jacqueline MacInnes Wood) will soon face serious consequences for her role in the electrocution of Ivy Forrester (Ashleigh Brewer). Could Steffy end up behind bars for this incident?

B&B spoilers tease that Ivy will wake up in the hospital and tell Wyatt Spencer (Darin Brooks) that Steffy pushed her into the sparking electrical panel and she keeps reliving that over and over. Ivy tells Wyatt it’s all she can think of right now.

Wyatt will be horrified. He was focusing all his anger on Thomas Forrester (Pierson Fode), but now it looks like all eyes will be on Steffy. We know that on Friday, December 11, Steffy will be hit by a restraining order that demands she stay far away from Ivy.

Did Wyatt call the law on Steffy – or will it be Thomas that does it? Or perhaps Liam Spencer (Scott Clifton)? All three men are on high alert right now about this incident. After Ivy tells Wyatt what Steffy did, he’ll likely share it with the others.

And Thomas is obviously falling hard for Ivy – will he step up to protect her from his sister or will he give Steffy the benefit of the doubt? Or will Liam be so concerned about this incident on top of the suspicious death of Aly Forrester (Ashlyn Pearce) that he contacts the authorities?

Eric Forrester (John McCook) is certain that Steffy is innocent and stands up to defend her, but will he also doubt her once he hears Ivy’s confession? And another interesting consideration – is Ivy exaggerating to land Steffy in hot water?

The bottom line is, with no one but Ivy and Steffy in the room, Ivy can say whatever she wants to implicate her rival. Will Steffy face criminal charges over this incident? Will Aly’s death come into play as evidence of a pattern of violent behavior?

Whether or not Ivy truly thinks Steffy did this to her – or is just scheming to punish her rival – remains to be seen. But it looks like everyone will soon be rallying around Ivy and against Steffy in coming days. Liam dumping her may just be the start of Steffy’s troubles.

Will we soon see Steffy accessorized with handcuffs instead of high-end jewelry? Does she deserve to be punished for her actions? Share your comments below on whether Steffy should face criminal charges for the Ivy electrical incident.

Come back to CDL often for more “The Bold and the Beautiful” spoilers, gossip and news.

The Bold and the Beautiful Video Promo for Friday, December 11