BY Heather Hughes on December 11, 2015 | Comments: one comment
Related : Soap Opera, Spoiler, Television, The Bold and the Beautiful 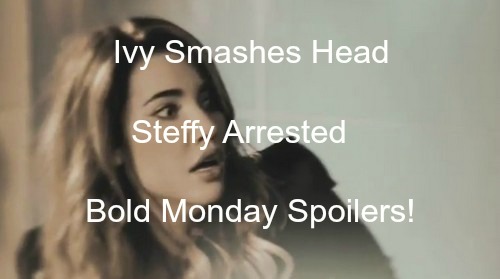 “The Bold and the Beautiful” (B&B) spoilers reveal that Steffy (Jacqueline MacInnes Wood) is about to get caught in another unfortunate situation. Once again, Steffy will inadvertently cause a mishap that puts someone in danger.

Ivy (Ashleigh Brewer) recently filed a restraining order against Steffy. However, Steffy feels that’s outrageous. It appears Steffy will believe they can work through their drama if they just have a chance to talk.

B&B spoilers tease that Steffy will pay Ivy a visit in hopes of putting their problems behind them. Ivy won’t be in the mood to chat. It seems Ivy just wants to say goodbye and good riddance to Steffy’s antics.

They’ll end up getting into a heated confrontation and things will take a perilous turn. Ivy will fall and hit her head as the argument intensifies. Naturally, Steffy will panic. This is going to look bad—REALLY bad.

It’s terrible that Steffy is unintentionally causing more injuries for Ivy, but the fact that Ivy had a restraining order makes all of this even worse. “The Bold and the Beautiful” spoilers indicate that Ivy will eventually call 911 and Lt. Baker (Dan Martin) will show up to arrest Steffy for her violation.

Liam (Scott Clifton) will be stunned when he finds out that Steffy disregarded Ivy’s legal action and took the conflict too far…AGAIN.

What’s it going to take for Steffy to understand that she can’t keep doing this? Perhaps a little jail time would do the trick. We don’t know if it will come to that, but it’s certainly within the realm of possibilities.

While Ivy provoked Steffy during their first altercation, this time Steffy has no one to blame but herself. Steffy could lose Liam and head to prison if she doesn’t straighten up. Stick with “The Bold and the Beautiful” for updates on Steffy’s battle to regain control of her life.

So B&B fans, what do you think about the news that Steffy will violate Ivy’s restraining order? Does Steffy deserve to be arrested? Will Steffy be able to hang onto Liam after everything that’s happened?

The Bold and the Beautiful Video Promo for Monday, December 14